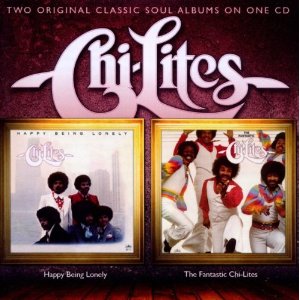 Chicago’s Chi-Lites are one of soul’s all-time great vocal groups and, led by original member Marshall Thompson, they’re still going. I hesitate to say going “strong” because though they still regularly perform (they’re touring Europe with Mary Wilson in the Spring) and record sporadically, it’s fair to say they will never again recapture the glories of their early seventies Brunswick days. Here, on this new “twofer”, David Nathan’s soulmusic.com label offers a pair of albums from the tail end of those glory days. You see, around 1974/75 Brunswick encountered big financial problems and Chi-Lites’ main man Eugene Record left for a stab at solo stardom. Despite those setbacks Marshall Thompson and Robert “Squirrel” Lester resolved to carry on with the Chi-Lites’ brand. They recruited three new members and scored a deal with Mercury which resulted in these two albums – 1976’s ‘Happy Being Lonely’ and ’77’s ‘The Fantastic Chi-Lites’, and both are great examples of the art of the sweet soul vocal group.

Thompson produced ‘Happy Being Lonely’ and cleverly tried to craft a slightly different sound for the group. Indeed most commentators agree that – overall – the sound of the album is more Philadelphia than Chicago. The title cut, for example, sounds uncannily like a Blue Magic track while the five some also have a stab the Spinners’ lovely ‘Games People Play’. Both are great tunes as too is a wonderful version of Sam Dees’ ‘Vanishing Love’ but the outstanding recording is a sweet ballad called ‘Don’t Blame The World’. Here, writer Billy McGregor and producer Thompson skilfully recreate the classic Chi-Lite sound …hear hints of ‘Toby’, ‘Have You Seen Her’ and many more.

For ‘The Fantastic…’ the group turned to Richard Rome and Phil Hurtt to act as producers – so no surprise that the sound becomes even more “Philly” with more than a fair share of disco romps interspersed with some decent ballads where, for the most part, the inspiration seems to be the hits of the Manhattans. So on ‘Love At Its Best’, ‘Suddenly’ and ‘I’ve Got Love On My Mind’ the romantic cooing is prefaced by that that deep-voice spoken intro. The best of the slowies though is ‘If I Had   A Girl’ which features Stevie Wonder on harmonica, while ‘Who’s In Love With Me’ offers something a little different – a jazzy, swinger this one.

Sadly neither album did much on release. Mercury weren’t overly pro-active with their promotion while the radio programmers believed that the Chi-Lites were a spent force.   The evidence here proves that latter assertion quite wrong – the Eugene Record-less group could still cut it and vocal group collectors will be delighted with these first time reissues.