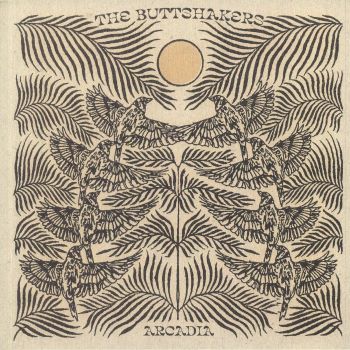 The Buttshakers are a US/French soul and funk band who peddle a sound inspired by James Brown, Gil Scott Heron, Marvin Gaye and Curtis Mayfield. The band are making noises (literally!) with this, their fifth album with critics making comparison between the Butts and the Daptone sound – more specifically, the sound of Sharon Jones. That’s chiefly down to leather-lunged lead singer, Ciara Thompson. Ms T is an American but relocated to Lyons, France in 2008 where she eventually teamed up with the musicians who would become the Buttshakers.

‘Arcadia’ was heralded by a summer single, ‘Not In My Name’… a tough and gritty funk tune featuring full on horns and a take-no-prisoners vocal from Ciara. In essence that’s the signature sound of the 10 tracker. But, maybe more important  than that sound, is the message in the music. The title of that single actually sums up where it’s coming from. You see, here Thompson and her team have taken the opportunity to take a look/swipe at what’s going on politically and socially in America. Ciara says in France she’s found a freer mode of expression …. “untethered from the idealistic veil of my childhood, my America now appears in its crudest reality; disfigured by violence and racism, the streets transformed into makeshift shelters for those without a home”!

That said, you’d expect ‘Arcadia’ to be po-faced and heavily didactic, but it’s not. Sure much of the music is tough – that’s the essence of the funk, that the band peddle but in places there’s a pleasing lightness of touch that somehow makes the message more relevant. Case in point is ‘Keep On Pushing’. No, this isn’t the Impressions’ classic (but possibly a nod to dear old Curtis?); rather it’s a pacey, frantic Northern-flavoured workout that sweeps you along. The sonic reference is Daptone. Hear that too on the slower ‘Gone For Good’, the brassy ‘Never Enough’, the loose and funky ‘Daddy Issues’ and  the moody ‘Night Crawl’. Elsewhere, (try ‘Go On’ and ‘Back In America’) on which Ms T is maybe more Janis Joplin than Sharon Jones – but by now, I’m sure, you’re getting the sonic picture and from the song titles you can work out where the album’s coming from.