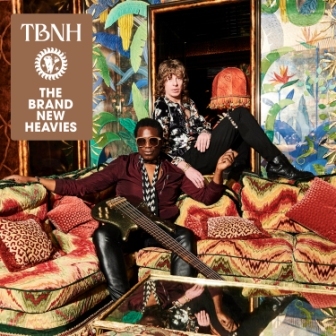 Don’t know too much about wine, so no idea what the upcoming Beaujolais harvest will be like… vintage or not! But I do know that by any stretch of the imagination 2019, so far, has been a proper vintage year for soul albums. Within the hallowed pages of soulandjazzandfunk we’ve highlighted any number of four and five star albums…. think Tony Momrelle, Cool Million, Terri Green, Durand Jones, Tony Lindsay and more! Now as autumn beckons we can add to that list another ab fab soul set…. ‘TBNH’ from The Brand New Heavies – now essentially Simon Bartholomew (guitar) and Andrew Levy (bass).

‘TBNH’ was flagged up way back in June with the single ‘These Walls’. The Kendrick Lamar song was produced by self confessed BNH uber-fan, Mark Ronson. Ronson and the Heavy boys give the tune a big, Latino treatment and to add a dash of proper BNH flavour the vocals are down to long-time band collaborator N’Dea Davenport. Ms D is there on one of the album’s other big tunes – an optimistic and groove-laden ‘Getaway’ which offers added dance sparkle via a sample from the Emotions’ ‘Best Of My Love’. Little wonder it’s winning plenty of plays.

In honesty, though, each and every of the 14 tracks offers something positive and if you factor in some other big, big name vocalists you’ll understand why we said up top that ‘TBNH’ is one of THE soul albums of the year. Let’s just look at a few of the other goodies on offer, starting with the opener, ‘Beautiful’. With a typically convincing vocal from Beverly Knight, it sets out the album’s stall from the start. Big and “up” in every way – like ‘Stupid Love’, which follows hot on its heels… Angela Ricci on vocals here.

Angie Stone (yes!) is at the mic for the bluesy ‘Together’ while Siedah Garrett (yes, again!) fronts ‘Just Believe In You’ – as near to the classic old school Brand New Heavies’ sound as you can get.

Even is such august company Simon Bartholomew will always fancy his chances in the vocal department. He leads the charge on ‘The Funk Is Back’ where the inspiration seems to be the dear old Average White Band. The LP’s other guest singers are Honey LaRochelle, Laville and Jack Knight who fronts the EWF flavoured ‘Little Dancer’. Jack wrote the song too.

The band is on the road through October and November – a diligent web search will give you the details. No details yet who’ll be taking the vocals but you can be sure the shows will feature plenty of these new songs. You can be sure, too, that ‘TBNH’ will add to the already impressive chart and sales stats that the band has chalked up…. sixteen Top 40 hits and three million album sales! Plenty more to come!