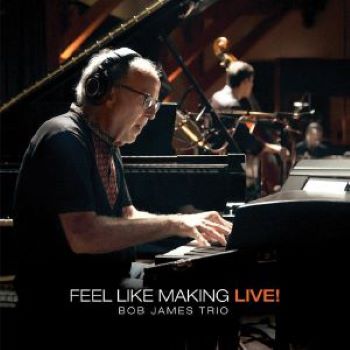 Keyboard maestro Bob James has enjoyed a long and successful career. Can you believe that he debuted in 1963 as the “Bob James Trio”  with an album called ‘Bold Conceptions’? Now aged 80, you’d understand if James wanted to hang up his metaphorical boots! But no! He famously once said that “music is more than fun – it’s life’, so, with that attitude he’s not going to give up anytime soon. Accordingly, in October 2018 and hot on the heels of his last album, ‘Espresso’, James booked himself into Arlington’s Sage Arts studio to do what  he likes doing best – playing live. With the sidemen he used on ‘Espresso’ – veteran sticks man, Billy Kilson and bassist Michael Palazzolo  – he soared through 13 tunes – all beautifully captured “live” by engineer Tom Hall.

The studio performance’s repertoire reflected many of the high spots of James’ career but there’s also a generous smattering of musical surprises. The James’  chestnuts include ‘Angela’ (the ‘Taxi’ theme) which opens the album, ‘Maputo’ (you’ll remember this as a David Sanborn collaboration), ‘Westchester Lady’, ‘Nautilus’ and ‘Feel Like Making Love’ – from which the album gets its (albeit subtly changed) name. This   version of ‘Feel Like Making Love’ is an epic 9 minutes long –  extended by a careful blend into another James icon ‘Night Crawler’ . So, yes, expect the unexpected on these old favourites – most of ‘em peppered with cameos from Kilson and Palazzolo.

Given the time proximity, this new set also includes some tunes that were featured on ‘Espresso’ So here there are new versions of ‘Mr Magic’, ‘Topside’  and ‘Submarine’ – which was, of course, inspired by ‘Nautilus’.

Amongst the album surprises are versions of Elton John’s ‘Rocket Man’ and Petula Clarke’s ‘Downtown’. James, it seems, is a big fan of Elton John while the cover of ‘Downtown’ is in honour of classical pianist Glen Gould who was a fan of Pet Clarke!  No surprise then that this new ‘Downtown’ is given a semi-classical makeover – stylistic allusions to J S Bach no less! As we’ve just said, “expect the unexpected”

The album sleeve notes come courtesy of esteemed SJF colleague Charles Waring so (obviously) they are hugely interesting and absorbingly informative; like all good sleeve notes, adding to the overall listening pleasure!

The whole recording was filmed and ‘Feel Like Making Live!’ will be will available in different Blu – ray formats. There’ll also be all the usual audio formats including high end Dolby as well as this new-fangled vinyl thing! Sadly you’ll need to wait for the end of January for official release – but the wait will be worth it. After almost 60 years, “the Bob James Trio” are still doing it!