THE BAMBOOS: Hard Up (Pacific Theatre) 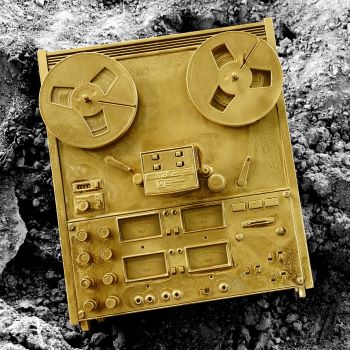 ‘Hard Up’ is the Bamboos’ tenth studio album and the Aussie combo announced its imminent release back in February in a surprising way. The released a cover of Black Box’s 1989 smash ‘Ride On Time’ as a taster for the upcoming album… a surprise in 2 ways. First Lance Ferguson’s band rarely deliver covers and, secondly, a bombastic slab of “Italo house” isn’t the kind of thing you’d associate with the Bamboos. However, not to worry. Lance and the team reinvented ‘Ride On Time’, crafting a tough groove complete with a haunting organ, a booming bassline, a three-piece horn section carrying the hook and a fab and feisty vocal from long-time Bamboo collaborator Kylie Auldist. In other words, they delivered a typical Bamboos tune and the other 10 tracks that make up ‘Hard Up’ are exactly what you’d expect.

Fans would have known that, since the LP’s two other leaked singles were built from all the usual Bamboos’ ingredients. ‘Power Without Greed’ was/is a big, beefy sound….wah wah guitars, rock solid drums, horn riffs, an anthemic chorus and another soulful vocal from Ms. Auldist. Kylie was/is out front on the album’s title cut (the third single) – another Hammond-led, loose funk groove featuring a phantom whistler!

‘Hard Up’(the album) offers plenty more funk – like ‘Tomorrow’, ‘Nothing I Wanna Know About’ and the instrumental ‘Upwey Funk’. But the beauty of ‘Hard Up’ is that there are other flavours too. ‘I Just Heard You Leaving’ sounds like a classic Southern soul ballad recorded down in Memphis or Muscle Shoals. (It was actually recorded in a country house just North of Melbourne!) while the ultra-catchy ‘The Thing About You’ has a distinct Northern soul flavour. Kylie Auldist shines on both tunes.

The album features three other guest vocalists and I guess real soul fans will be most intrigued by the inclusion of the wonderful Durand Jones on the credits. The Indications’ front man is at the mic on the properly soulful ‘If Not Now (Then When)’ – a top tune by anyone’s standards! L.A. vocalist Joey Dosk fronts a sweet and lovely ‘It’s All Gonne Be OK’ while Aussie singer Ev Jones leads on the equally sweet and lovely ‘While You Sleep’. Those three tracks would be standouts on any soul collection. Here, they’re three amongst many. Need we say that ‘Hard Up’ comes highly recommended!