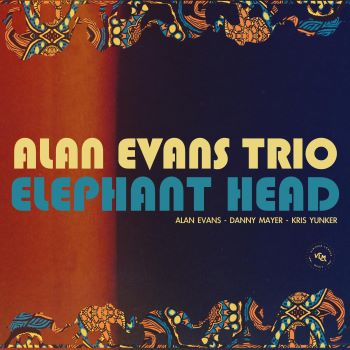 We’ve said it before and we’ll say it again – drummer Alan Evans is a man of many musical roles and guises. A drummer, yes  but he turns his hand to other instruments too. He writes, produces, arranges and engineers in the studio. His performing/recording aliases include Crushed Velvet & the Velveteers, Soulive, The 7 Day Weekend and, where it all started  – the Alan Evans Trio. And it’s that trio that’s the vehicle for his latest musical outpouring – the 8 track album that is ‘Elephant Head’, the band’s  first since 2019’s ‘The Wild Root’.

Like that one, ‘Elephant Head’ is an instrumental album of jazz-flavoured, funk-tinged, soulful  grooves, and infectious melodies. Despite the fact that the Trio is organ-led (Kris Yunker is the organ grinder, the guitarist is Danny Mayer; Evans, the drummer , of course), this isn’t your standard soul-jazz album though the music’s roots are in that genre. Here, the overall soundscape is less-focused, more cinematic  – as on ‘Sunset Trails’ , ‘The Hitchhiker’ and ‘Route 68’ (those  titles surely evoke  images of  long lost 50s /60s movies?). ‘Stranger Things’ is tougher altogether, though album standout is the closing ‘Birth Of Peace’, an ambient piece that would suit any Ibizan chill out collection – the clue’s in the tune’s title. The album’s title cut, by the way, takes us back to a movie soundtrack. Here you can imagine a zany, Peter Sellers-starring 60s film. Even the title sounds like a crazy movie!

‘Elephant Head’ is out now on Vinyl and Digital via Vintage League Music and on CD in December 2021.