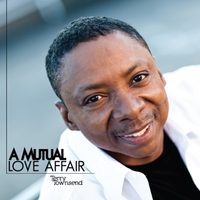 Terry Townsend is a respected Gospel singer from Athens, Alabama. He began singing in church when he was 7 and went professional on his sixteenth birthday, touring with the Mighty Determinents – popularly nicknamed “the songbirds of the South”. In 1992 Terry released his first solo album – ‘Just Believe It’, which raised his profile sufficiently to get him support slots with artists like Dorothy Norwood and work with producer Kelvin Wooten… and it’s Wooten who’s at the desk for Terry’s latest album, ‘Mutual Love Affair’.

The 11 tracker (ignore the brief interludes) is very much in the contemporary gospel vogue popularised by artists like Daryl Coley and Be Be and Ce Ce Winans. Stand out track is the title cut… an easy-going laid back affair that is actually a duet with Alexandria Thomas. It’s great tune that reminds me of then Billy and Sara Gaines classic ‘I Found Someone Who Loves Me More’. Easy to hear why it’s the lead cut. Like the rest of the album it’s flawlessly produced and though the lyrics on the LP are often predictable (do we need another ‘Imagine’ type song?) there’s a lot here to please the gospel brotherhood. The more sophisticated soul crowd might also enjoy stuff like ‘Whatsoever’ and the clipped beater that is ‘The Narrow Way’. Those modern soul people who want to investigate can do so @ www.terrytownsend.net