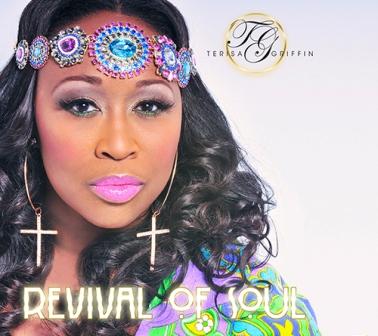 Born down in Louisiana, Terisa Griffin now lives and works in Chicago. Her career CV includes bvs for people like Isaac Hayes, Ashford & Simpson, Roberta Flack, Jerry Butler, Patti LaBelle, Rahsaan Patterson, Diana Ross and Floetry. Terisa also heads up her own production company which has staged a series of “One Voice, One Woman” shows… essentially tributes to the top jazz and soul divas.

Her own latest album, ‘Revival Of Soul’, is a logical extension of those shows. The album, Ms G. says, is her attempt to revive an era when music was properly soulful and on the generous 15 tracker she makes a sterling effort to craft a soundscape that harks back to soul’s golden era. It helps that she possesses a classically soulful voice that has shades of Millie Jackson and Angie Stone about it. Her Gospel-reared voice (her father was a minister) shines stridently on what is essentially a set of soul ballads – some more sensual than others. One wonders, for instance, what her father might have made of ‘Cotton candy Kisses’ – an album highlight that boasts the sub title “Oral Pleasure”!

The LP’s two other standouts are equally sensuous and they’re both covers – a version of ‘Oh Me Oh My, I’m A Fool For You’ (made famous by Lulu, though do check Joe Tex’s version) and a take on Marvin Gaye’s ‘Distant Lover’. They’re both what I’d call “proper soul music” and, of course, Terisa had two great songs to start with her. Many of her own original compositions tend to meander but maybe that lack focus is just the modern way… the influence of neo-soul maybe?

The album’s title is echoed in three short interludes and then reprised in what’s billed as a “bonus track”. This one’s called ‘Revival Of My Soul’. Notice the subtle use of the possessive pronoun, absent in the album’s title. This is a much more personal tune, dealing with the problems of domestic violence and the way (apart from the obvious) it emotionally drains the victim. Hence the demand for a revival of MY (i.e. the victim’s) soul. It’s a powerful, brave and stark tune to end an album on but it allows us to witness the emergence of a real soul contender!