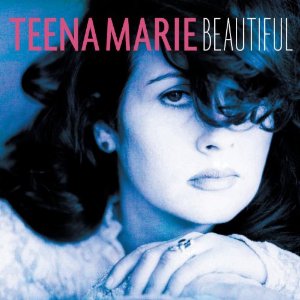 Teena Marie’s death on December 26th 2010 came as a devastating shock to soul fans around the globe – after all, the Californian singer/songwriter  was only 54, and still riding a wave of success that followed in the wake of her acclaimed 2009 Stax album, ‘Congo Square.’ And unlike many of her contemporaries, most of who had long bitten the dust or were resigned to working on the golden oldies circuit, Marie was still a headline act, making valid contemporary music and racking up impressive sales and chart positions in the States. Two years on from her untimely passing, the singer born Mary Christine Brockert has a new album out, ‘Beautiful.’ The accompanying press release states that the album was completed by the singer just prior to her death and only required mixing. It’s hard to tell how true that is, of course, as it is with all posthumous albums. What is more certain, however, is that ‘Beautiful,’ as posthumous albums go, is very impressive indeed and it doesn’t sound like something cobbled together from the archives. In fact, it’s a coherent opus that’s right up there with Teena Marie’s best work.

The album is consistently strong and bears all the hallmarks of Teena Marie’s distinctive style: passionate, almost histrionic vocals, well-wrought songs and irresistible grooves. There are plenty of highlights – ranging from the infectious, Latin-tinged ‘Maria Bonita’ and sprightly uptempo opener ‘Luv Letter’ – but for this writer, one tracks stands head and shoulders above the others – ‘The Long Play.’ It’s an epic piece of Quiet Storm balladry whose hypnotic groove has an ’80s vibe and is stylistically reminiscent of the work that Philly producer Nick Martinelli did with singers like Regina Belle (interestingly, Martinelli’s right-hand man, Doug Grigsby, is Marie’s co-producer on this album). There are other strong ballads too – the sensual ‘Carte Blanc,’ ‘Wild Horses,’ and a shimmering revamp of Curtis Mayfield’s classic ‘Superfly’ slow jam, ‘Give Me Your Love,’ which features vocals from Marie’s talented daughter, Alia Rose (who also was responsible for completing the album).

‘Beautiful,’ then, is a very strong long player indeed and adds another chapter to the rich legacy of recorded music left behind by the late ‘Ivory Queen of Soul.’ Her reign may be over but her legend continues to grow…