TED TAYLOR; Keep What You Get (Kent) 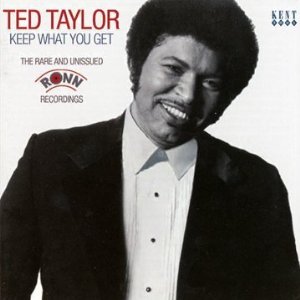 In his notes to this lovely 20 tracker, compiler Tony Rounce describes Ted Taylor as “R&B Marmite”. Rounce is spot on. Soul collectors either love or loathe Taylor and it’s all down to his unique, idiosyncratic voice that, at best, is a strained, high tenor, which, once heard is never forgotten. It seems that the record buying public found THAT voice a little too much to take because despite a long career and a multitude of releases, Ted failed to have any real chart impact. (His only Hot 100 hit was 1966’s ‘Stay Away From My Baby’ which peaked at #99!)

Over the years the reissue labels have done a great job with Taylor’s back catalogue and collectors have had the opportunity to reassess their original opinions. This new Kent set (which focuses on rare and previously unissued material that Taylor cut for the Ronn label) offers more evidence that maybe the buying public in the 60s and 70s got it wrong because ‘Keep What You Got’ offers plenty of material that could have (indeed should have) been hits. Case in point is the superb opener, ‘Farewell’. Despite the lack of credits, it’s clear that the song was recorded in Chicago when Ted was working with Willie Henderson because it has all the ingredients that make the Chicago sound so damn attractive! Incredibly, Ronn label boss, Stan Lewis failed to release it… so, clearly it wasn’t just the record buying public whose judgement was flawed.

Elsewhere, the also previously unissued, Bobby Patterson ballad ‘Make Up For Lost Time’ is superb… a real Stylistics’ style smoocher. ‘Got To Have A Woman’ is another outstanding ballad. Deep and disturbing, this one too has lain in the vaults till now! The set’s other goodies include a catchy ‘Fair Warning’ and a quartet of duets with label mate Little Johnny Taylor. The best is the hook-laden ‘Pretending Love’. The album also offers plenty of soul-blues (Rounce calls it “bluesoul”) and we even get a few stabs at disco of which the wonderfully-titled ‘She Got A Munchy Tunchy’ is best described as “interesting”.

Taylor died in a car crash in 1987 still seeking a major breakthrough. Sadly, it never came, but thanks to labels like Kent and albums like this we can still enjoy a unique soul talent.