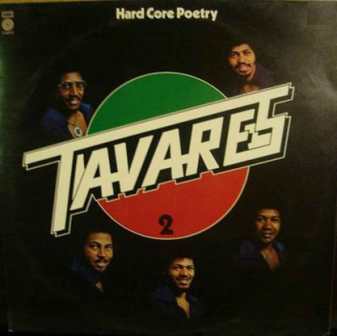 ‘Hard Core Poetry’ was the brothers Tavares second Capitol LP. Released in 1975, it underlined what their label debut – ‘Check It Out’ – had suggested; that here was a new group who could rival the very best…. and to ensure that that happened, Capitol execs assigned Dennis Lambert and Brian Potter to produce the set. The duo were hot off the backs of reigniting the Four Tops post-Motown career and, indeed, the ‘Hard Core Poetry’ 9 tracker has a lot in common with the Tops’ Lambert and Potter collaborations… pop soul of the very highest order. Lambert and Potter even gave the fivesome an old Tops song to work on and Tavares’ version of ‘Remember What I Told You To Forget’ went onto become an R&B and pop hit when released as a single.

Other highlights on the album include a defining version of Hall & Oates ‘She’s Gone’ (a no. 1 R&B hit for Tavares), the catchy opener ‘Someone To Go Home To’ and the insightful title track. Dip in anywhere though and you’ll hear classy harmony soul and to the best of my knowledge this is the first time the collection’s been out on CD. To make an investigation more tempting the release boasts two bonus cuts – single edits of ‘Too Late’ and ‘Remember What I Told You To Forget’.