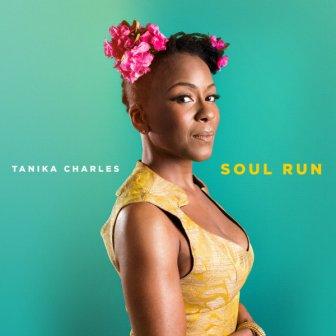 They soul community first got to know about Toronto-based soul singer Tanika Charles last year when her oh so catchy ‘Endless Chain’ won lots of support from the savvy modern soul crowd. Little wonder it was (indeed is) a great tune. Totally contemporary but with its roots in classic uptown soul it boasts lovely harmonies, tight beats and a committed vocal from Ms Charles. Indeed it has everything that makes great soul music so damn satisfying.

‘Endless Chain’ is the centrepiece of ‘Soul Run’… a long player that had limited release last year on Tanika’s own label. Now, licensed to Record Kicks, the set’s rightly being re-promoted and if you haven’t heard ‘Endless Chain’, now’s the time to rectify the situation. You won’t regret it.

Other cuts worth investigating are the sprightly ‘Sweet Memories’ and the Northern soul-flavoured ‘Love Food’ and ‘Two Steps’. Elsewhere, the mood is more sombre, dark even (witness ‘Heavy’). Maybe the melancholy stems from the journey Tanika made to make this album. Growing up in Edmonton, we’re told that she was trapped in an abusive relationship, eventually escaping to Toronto to start her singing career. She hustled gigs singing covers but realised to be really free she needed her own focus. So with a shoestring budget she began recording her own album and thereby enjoying real emotional release. Her people say that her favourite song on the album is ‘Darkness And The Dawn’. The title accurately describes the song’s message … yes, escape from a difficult relationship and eventual respite. “Once the song was recorded and finished, I cannot begin to tell you how therapeutic it was”, confirms Tanika. Maybe it was that release which enabled her to go and write something as uplifting as ‘Endless Chain’.