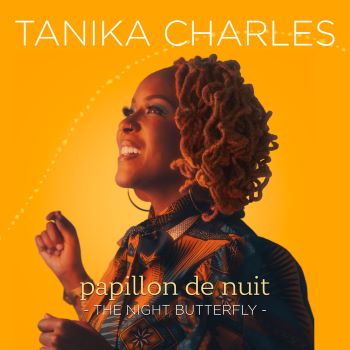 Tanika Charles is a Canadian soul singer and we’ve followed her progress since 2017 when she caught our attention with her single ‘Endless Chain’ and its parent album ‘Soul Run’. That was followed by a second long player, ‘The Gumption’ – both albums offering her take on a punchy modern soul sound while  at the same time paying huge respect to soul’s golden age. Tanika’s latest album, ‘Papillion De Nuit (The Night Butterfly)’, develops that sound.

The album’s release was flagged up by the single, ‘Different Morning’ – a pacy collaboration between Tanika and rising Toronto rapper  DijahSB and if up-tempo/mid-tempo  contemporary soul is your especial boat-floater, there’s plenty here. The opening track, ‘Million Way’s is a good example. It’s a modern sound showcasing Ms C’s powerful voice but spiced with some Memphis Hammond organ to give it a retro feel. ‘Hold Me (Like A Grudge)’, ‘Rent Free’  and the collaboration with Khari McClelland that is ‘Honey Baby’ have a 60’s Southern feel too. ‘Frustrated’ has a more modern sound – sweet and superficially gentle though Tanika digs deep vocally to sound like the title,  especially on the hook laden chorus.

‘Papillion De Nuit’ offers plenty of decent ballads too. The LP’s title track is a good example – intricate vocalising here. ‘Don’t Be So Entitled’ is sombre too – more shades of Memphis and/or Muscle Shoals and don’t be fooled by the gentle opening to ‘Gin And Wine’ – this one builds and builds… an album highlight which shows why Tanika has been nominated for plenty of awards in her native Canada.

‘Papillion De Nuit’ is released this Friday, 8th April. And that album/song title?  Tanika tells us that a “papillion de nuit” is a creature that comes to life after sunset –  a  moth, by any other name! Tanika believes that “papillion de nuit” sounds a lot better than the prosaic “moth”. Tanika compares herself to that “night butterfly” – a creature that “soars after the sun sets”! So now you know.