TAMMI TERRELL: Come On And See Me – The Complete Solo Collection (Hip-O Select) 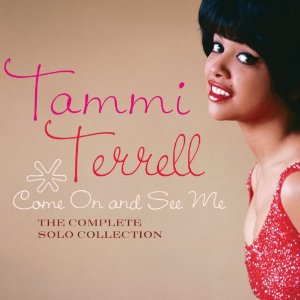 With no intention of trivialising matters, it’s fair to say that Tammi Terrell’s life story reads like a tragic, soap opera story line. Born Thomasina Winifred Montgomery in 1945, her early years were marked by helping to care for a clinically depressed mother – a situation that worsened considerably after 11 year old Tommie (the name she used with friends and family) was gang raped. The young Philadelphian found solace in music and – now named Tammy Montgomery – she signed her first recording contract with new York’s Wand/ Scepter Records. There followed a stint with the James Brown Revue – but after suffering physical abuse from Brown she moved on to work with Chess before working with Jerry Butler. After a Butler show in Detroit she was signed by Berry Gordy who changed her name and promised a glittering career … but yet again personal problems took their toll (notably an alleged abusive relationship with David Ruffin). In short, those problems took away the gloss of success she enjoyed as Marvin Gaye’s preferred duettist and dented the self-esteem that positive responses to her solo work had created. Then, in October 1967, Tammi collapsed onstage to be later diagnosed with a malignant brain tumour which would ultimately take her life two and a half years later.

There can’t be a more tragic story in the whole history of soul; thankfully though we have Tammi’s music to remember her by, and here Hip-O Select have magnificently collected together what is believed to be the sum total of her solo work. The two CD set begins with the seven tracks Tammi cut for Scepter. They typify the innocent girl group sound that the label was famous for and include a great version of ‘Make The Night Just A Little Longer’. The two James Brown produced tracks (‘I Cried’ and ‘If You Don’t Think’) are harder, while the five Chess recordings sort of sit in between and are best represented by the duet with Jimmy Radcliffe, ‘If I Would Marry You’. The rest of the first CD is given over to Tammi’s only solo Motown album – the wonderful ‘Irresistible’ – and finishes with a couple of non-LP singles – ‘Baby Don’t Cha Worry’ and ‘There Are Things’.

The set’s second CD is crammed with a plethora of rarities and though some – like the version of Stevie Wonder’s ‘All I Do’ – have been available before (on odd Motown compilations), most of the tracks (certainly these particular mixes) are brand new to CD and include the ultra rare ‘Kissing In The Shadows’ which features Johnny Bristol as guest duettist. The album’s last five tracks are equally rare. They are live recordings from a 1966 concert at Detroit’s Roostertail Club when Tammi opened for The Miracles. Backed by the Earl Van Dyke Band, she offers ‘Come On And See Me’ and ‘I Can’t Believe You Love Me’ along with a selection of standards on which she shows that even at 21 she had an enormous and mature talent that was never allowed to fully flower… tragic indeed.