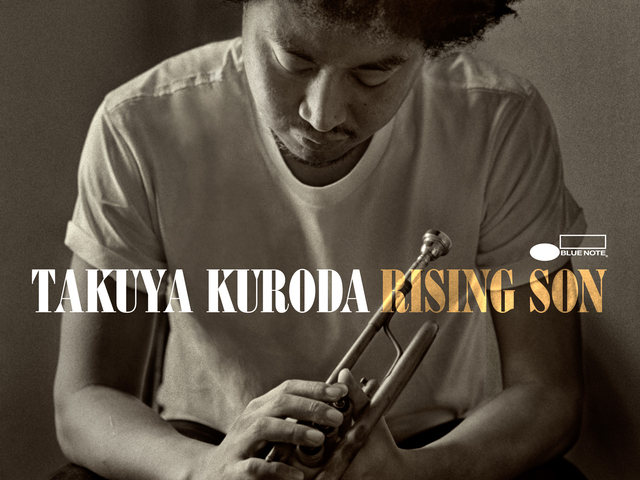 A graduate of New York’s prestigious New School For Jazz & Contemporary Music, Japanese trumpeter Takuya Kuroda follows up his two promising self-produced indie albums – ‘Six Aces’ and ‘Bitter & High’ – with his major label debut for Blue Note. Helmed by Blue Note label mate, José James – with whom Kuroda has toured and recorded with since 2010 – ‘Rising Son’ is an impressive affair. James’ jazz-meets-hip-hop influence is palpable on the opening title cut, where a fluid two-horn melody (played by Kuroda together with trombonist Corey King) rides on a jaunty, mellow head-nodder of a groove. More urgency is displayed on ‘Afro Blues,’ a chugging slice of Afrobeat led by snaking horn lines. The groove turns to a soulful simmer on the mid-tempo ‘Piri Piri,’ another track boasting strong solos and cohesive ensemble interaction. By contrast ‘Mala’ – with Kris Bowers on acoustic piano – evinces a more orthodox contemporary jazz feel, convincingly demonstrating that Kuroda is a flexible jazz musician who can play both straight and funky. The latter side of the trumpeter’s musical personality manifests itself on two Roy Ayers covers – the anthemic ‘Everybody Loves The Sunshine’ (with José James supplying a vocal cameo) and ‘Green And Gold,’ both of which are given a new sonic spin and rendered tastefully. Even more impressive is the mournful ballad, ‘Sometime, Somewhere, Somehow,’ which highlights the reflective side of Kuroda’s playing. Similarly sensitive is the lengthy and atmospheric closing track, ‘Call,’ with Kuroda using a muted trumpet on the intro before a mellow groove emerges over which the horn man and Corey King lay down a sinuous harmonised melody line. The track also shines a spotlight on the ear-catching Kris Bowers, who delivers a sublime electric piano solo. With his uniquely soulful approach to jazz, Takuya Kuroda has made an album that should find favour with enlightened R&B and hip-hop fans as well as serious jazz heads.