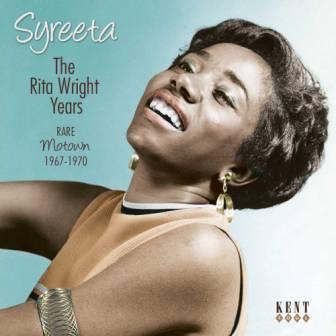 Since Ace/Kent were allowed access to the Motown vault they’ve issued plenty of outstanding collectors’ material and they continue with this 24 tracker on Syreeta… or “Rita Wright”, the name she used during the period of these recordings (1967 – 1970).

Born in Braddock, Pennsylvania, Syreeta Wright’s family moved to Detroit when she was a child. In 1965 she got herself a job in the Motown office and like several other backroom staff she eventually found herself in the studio singing backing vocals and fronting demos. One of her efforts impressed the Motown quality controllers and, so, in 1967 Rita Wright’s ‘I Can’t Give Back The Love I Feel For You’ was released on Gordy. (Motown histories tell us that Syreeta was asked to use the new name, “Rita”, because the song’s writers, Ashford and Simpson, felt Syreeta would be too hard for prospective buyers to pronounce!) Sadly the name had very little impact as the record bombed and a disappointed Syreeta/Rita went back into the typing pool though continuing to cut demos for the various teams of Motown writers hustling to get their songs to the label’s big names.

This Kent collection pulls together everything the Ace/Kent diggers found on Syreeta in the Motown vault from 1967-1970. They believe that there is more, but the 24 cuts here are the only ones that were mixed down at the time.

Apart from ‘I Can’t Give Back The Love I Feel For You’ (which opens proceedings), the most famous song here is ‘Love Child’… a hit of course for the Supremes in 1968. Unsurprisingly, Syreeta’s version isn’t a million miles away from the hit version; in fact Ms W “does” a great Diana Ross! Throughout the album you’ll hear more shades of La Ross… like on ‘(Touched) By The Hand Of Love’ and ‘Since You Came Back’. Other tunes that will attract interest are Rita’s versions of Laura Nyro’s ‘Save The Country’ and Smokey’s ‘Bad Girl’ which, for obvious reasons is re-named ‘Bad Boy’. On this (and the other excellent ballads) you’ll be impressed by the sweet, fragile soulfulness of the vocals.

Motown buffs will know that Syreeta married Stevie Wonder in 1970 and her career path took a new trajectory. Her post 1970 recordings have long been easily accessible. This new collection fills in an important void.