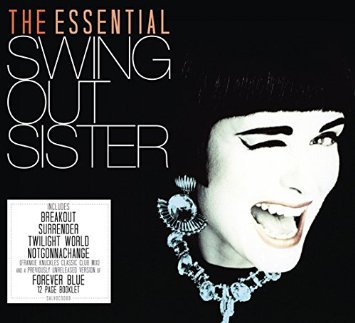 Hard to believe, yes…. but Swing Out Sister have been crafting their beguiling take on smooth soul for almost 30 years. To celebrate, Union Square Music have put together a 17 track retrospective of Corinne and Andy’s best work and they couldn’t have come up with a better title – “Essential”.

The album begins with their breakthrough release, the still lovely ‘Breakout’, and ends with a previously unreleased version of the movie song ‘The Windmills, Of Your Mind’. In between you get lots of great tunes like ‘Surrender’, ‘Waiting Game’ and ‘Love Won’t Let You Down’. Self-penned, they sum up the elegant soulfulness that the duo have made their calling card. The songs they craft have all the beauty and catchiness of the best of the Brill Building era. Brill Building luminary, Burt Bacharach once said that it’s rather quite difficult to write a song that sounds simple and catchy but like Burt and other great song smiths like Carole King and Gerry Goffin, Drewery and Connell mastered the art from the start… and there’s so much evidence to prove that here!

But Corinne and Andy are also good at picking songs to cover and here you can hear their wonderful versions of ‘La La Means I Love You’, ‘Am I The Same Girl’ and the Brazilian standard ‘Waters Of March’. On all three the duo offer something fresh and different … quirky even, making the songs their very own. On any album by lesser artists they would be standouts; here they’re just three amongst many. Fans will all, I guess, have their own favourite cuts. I keep coming back to the wonderful Frankie Knuckles mix of ‘Notgonnachange’. The late mix maestro didn’t have to do too much to this one to make it extra special; he simply stressed the excellence that was already there. Yes, it’s essential, like everything here.

The ‘Essential Swing Out Sister’ is released on October 6th.