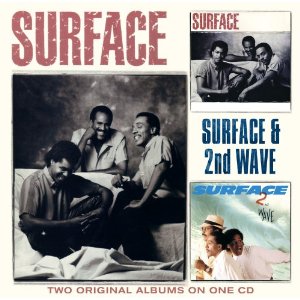 Surface were an 80s vocal trio, best remembered for their still catchy song ‘Happy’. Bernard Jackson, David Conley and David Townsend (the son of Ed Townsend) first came together in New York City as staff writers at EMI where they penned hits for people like Sister Sledge and New Edition. After relocating to Los Angeles, they were signed as performers to Colombia Records where exec, Larkin Arnold was building a soul roster that already included Peabo Bryson and Natalie Cole. They cut three albums for Columbia and, here, reissue specialists, Super Bird offer the first two.

The eponymous debut LP is built around ‘Happy’ and most of the rest of the music is built from the same elements; that’s to say – plenty of gurgling, burbling synths and basic drum machine patterns, but nothing matches the infectiousness of ‘Happy’. The formula works best on the slower songs – like the nice, “Quiet Storm” moment that is ‘Gotta Make Love Tonight’ but the faster songs (like ‘You’re Fine’) are very much 80s time pieces and haven’t travelled well at all.

The music on the ‘2nd Wave’ LP is built from the same elements and (as on the band’s debut), though the boys sing and harmonize sweetly the potential is restricted by the instrumentation. Each track kind of reminded me of Freddie Jackson’s ‘Rock Me Tonight’ – but minus the hook and passion that made that into a hit . Nevertheless, Just as 60s soul folk eagerly lap up the reissues from “their era”, I’m confident that those weaned onto soul in the 80s will love this release.