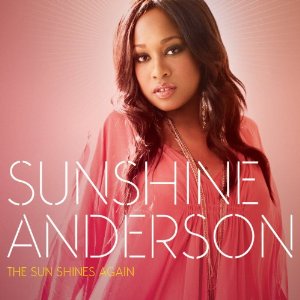 Sunshine Anderson is responsible for one of the greatest up-tempo soul records of the 21st Century. Her 2001 epic ‘Heard It All Before’ was a no.1 R&B hit and a pop top twenty smash, but, more importantly it possessed a timeless vibe and passion that can still get people off the wall and feeling the music. The album that spawned the song (‘Your Woman’) was also a big seller and everybody looked forward to more sunshine from Ms. Anderson. But for all kinds of personal and business reasons nothing materialised till 2007 when ‘Sunshine At Midnight’ hit the sales racks. Wrangles with the label (Music World Entertainment) meant the LP was little more than a damp squib and soon Ms. A found herself with a child and a floundering marriage and both, it seems, sapped her performing confidence. She readily admits that in what she calls her “lost years” she “forgot who she was”. The good news is that the lady is back. As feisty as she was back in the day, our girl’s still working with Mike City and there’s a whole new confidence in everything about this album – even that title!

Only time will tell if the set yields another ‘Heard It All Before’ but the album offers a couple of outstanding modern soul dancers. First up there’s the tight ‘Call My Own’ on which the beats are quite irresistible; then there’s ‘Hard Love’ – which, though a little lighter, is built on those same crisp Mike City rhythms. The opener, ‘Say Something’, offers a little more of the same but it’s clear that Sunshine wants to offer more than floor fillers. There’s any number of soulfully reflective cuts on the album, with, it seems to me, ‘Life Back’ being the key track. Given the background to the recordings, the sentiments are obvious – but presented here so beautifully. ‘A Warning For The Heart’ – on which she claims that “she doesn’t want to do the in-love thing anymore” – is another based on where she’s currently at, while the stark beauty of the melodic ‘Nervous’ reinforces what that 2001 debut set presaged. Here we have a major soul talent. Truly, the sun is shining again.