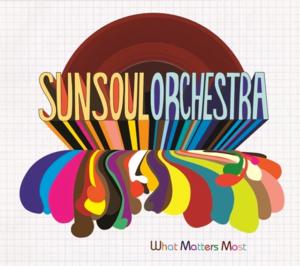 It’s odds on that you’ve never heard the names Stevo Theard and Ginger Murphy but we’re sure that if you’re a discerning music collector you will have heard them play. Percussionist Theard has played on recordings with people like Michael McDonald, Jeffrey Osborne, Patti Austin, Anita Baker, Brian McKnight and Branford Marsalis. For her part, cellist Murphy has worked with an equally diverse range of artists… Pat Benatar, George Benson, Michael Buble, Cee Lo Green, Faith Evans, Pharrell, Stevie Wonder and Barbra Streisand amongst them!

Both operate in and around the LA studio scene and they first worked together when drummer Stevo agreed to write an arrangement for a string quartet that Ginger was working on. They were both immediately intrigued by the possibilities of combining strings with percussion and the seeds of a collaborative album were planted. For the last year or so that’s what they’ve been working on and now – as “The Sun Soul Orchestra” – the 11 tracker has won release.

Helping them flesh out their ideas, Stevo and Ginger have called in the cream of the current LA sessions scene – people like saxophonist Rastine Calhoun, horn player J Michael Hunter and violinist Chris Woods and when a particular song demanded a rather special vocal, the duo were quick to bring in a specialist… as on the version of the Commodore’s ‘Zoom’ which features a wonderful vocal from soul man T J Gibson. Always a great song, this new version is remarkable for the way Murphy’s cello weaves through Gibson’s vocal.

The album’s other big cover is a treatment of Bob Marley’s ‘Waiting In Vain’. The reggae anthem is quite transformed into a string quartet and Theard himself takes lead vocals… different.

The best of the original tunes are ‘Can’t Deny It’ (which has the potential to please the modern soul crowd) and ‘Find Myself With You’ (a sweet ballad). You also get a cover of the Rolling Stones’ ‘Waiting On A Friend’ and a racy version of Sylvia’s ‘Pillow Talk’ which is echoed by a Benson-esque treatment of a tune dubbed ‘Keep Talkin”…. basically an instrumental extension of ‘Pillow Talk’

The album will be released on April 28th and you can learn more @ www.sunsoulorchestra.com