SUGARAY RAYFORD In Too Deep (Forty Below) 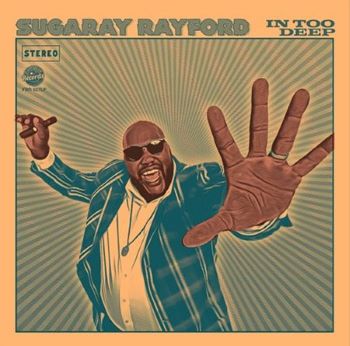 We’ve followed the career of Texas-born blues and soul man SUGARAY RAYFORD since 2017 when we discovered his album ‘The World That We Live In’. Released on Italian label, Blind Faith, it was stuffed with  old school values of passion, commitment and gospel-reared vocals… something sadly missing from a lot of what is touted as contemporary soul music.

His 2019 ‘Somebody Save Me’ LP  served up more of the same and last November the big man with the BIG voice ((he’s 6ft 5!) announced a new album was on its way. Well, it’s taken its time but said LP, ‘In Too Deep’ has just been released.

That upcoming  album announcement came via the release of  a single,  ‘Invisible Solider’ – a provocative outing that was, we’re told, inspired by Rayford’s struggles with insomnia from PTSD. We’re assuming he’s a military veteran as the song reminds  us how our urban communities are full of veterans struggling with the aftershocks of war and how it’s all invisible to most fellow citizens because those old soldiers aren’t in military uniform! A powerful message with a powerful sound – a proper old school soul outing that will recall  the best of Southern soul (think Hi/Malaco, even vintage Bobby Bland).

The great news is the 10 tracker contains plenty more of the same. The busy, brassy ‘Miss Information’ is another track with a message in the music – real/fake news! While ‘One’ suggests that “one world is all we need”. But ‘In Too Deep’ isn’t all didactic. ‘No Limit To My Love’ is an unsentimental, bluesy but romantic ballad, while the smoother ‘Golden Lady Of The Canyon’ extols the virtues of the song’s titular character.

Another of this album’s key cuts is ‘Please Take My Hand’ on which Sugaray goes back to his gospel roots. Rhythmic handclaps, murmured harmonies and a powerful lead voice might recall some of Gregroy Porter’s recent work. Which sort of begs the question why a powerhouse singer like Rayford is neglected in the mainstream while the vocally similar (if a little smoother) Porter is a superstar?

If you’re not familiar with the mighty Sugaray Rayford we heartily recommend you investigate.