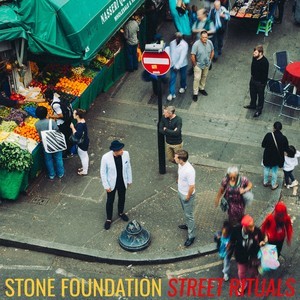 Stone Foundation are a UK soul band. Originally from the Midlands, their main men are self-confessed soul freaks Neil Sheasby and Neil Jones. Their debut set (with input from Carleen Anderson) dented the top 100 and though subsequent releases were a little less successful their fourth album ‘A Life Unlimited’ won them lots of friends and consolidated their position as a solid soul band with their own unique, contemporary sound that had its roots in classic soul. Indeed the album’s lead single, the Nolan Porter-vocalised ‘Beverley’ won plenty of air play and found its way into many a top DJs play out box.

Stone Foundation’s new long player, ‘Street Rituals’, is set for release at the end of this month and it starts where ‘A Life Unlimited’ left off. That’s to say it’s stuffed with Sheasby and Jones’ particular take on soul and just to keep them on their toes self-confessed soul boy, Paul Weller is on hand to help with the production. It’s no secret that one of Weller’s soul heroes is a certain Curtis Mayfield and amongst the ten tracks that make up ‘Street Rituals’ there are plenty of musical and lyrical references to the “gentle genius”.

Indeed the set opener, ‘Back In The Game’ is just about the most perfect Impressions tribute you’re likely to hear. It’s sweet and gentle and you’d be forgiven for thinking that Sam and Fred were cooing the harmonies and that Johnny Pate is up in the production booth. He isn’t, of course, it’s Mr Weller and for good measure he helps out on the vocals too. It’s quite lovely. The other album highlight also features Paul Weller. It’s another wistful Mayfield tribute, ‘Your Balloon’s Rising’ and it rivals Weller’s own ‘Above The Clouds’ as one of his very best.

Sadly singling out those two tracks doesn’t do justice to the rest of the album. There’s so much to enjoy here. Let’s mention a few: ‘Love Rediscovered’ is chock-a-block of the optimism that the title hints at; ‘The Colour Of…’rides a subtle jazz-funk undertow; ‘Strange People’ has a cameo vocal from William Bell over a Steely Dan-tinged backdrop; ‘Season Of Change’ is venomous and feisty, little wonder the band asked Bettye Lavette to front it; while the album’s title cut (Weller helping out on vocals again) is another throwback to 60s Chicago.

Highlighting those tunes is not meant to disparage the remaining 3 cuts…. they all have plenty to offer. Like everything here, they’re subtle pieces of work with lovely horn charts, sweet strings and provocative lyrics that speak of the times in which we live yet offer a degree of optimism. That sounds a lot like what dear old Curtis Mayfield did, doesn’t it?