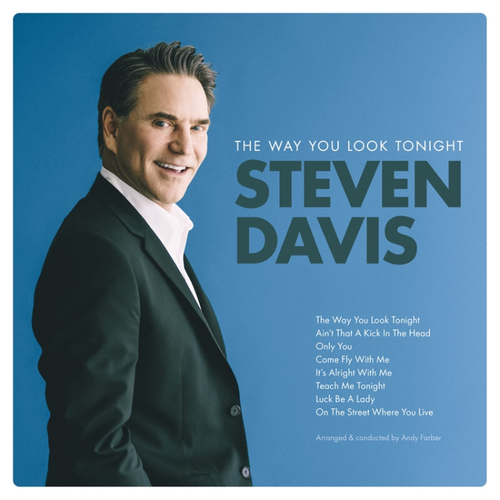 ‘Tis the season to swing, or so it seems. Curtis Stigers is all set to release his tribute to the classic Sinatra/Basie ‘Live At The Sands’ album while American lounge jazz/MOR entertainer, Steven Davis is busy promoting his own tribute to the Golden Age of Swing… ‘The Way You Look Tonight’, an album Steven calls “a beautiful homage to an incredible group of artists from that wondrous era when songs had soul, arrangements swung powerfully and poetic lyrics penetrated the heart.”

To give authenticity to his work Steven recorded the long player with a 17-piece big band while the recording took place at Hollywood’s iconic Capitol Studio A, yep, the same studio where Frank Sinatra, Nat King Cole and other masters of the genre cut their classic sides. The team was completed by producer Josh Charles, Grammy Award winning mixer/recording engineer Ed Cherney and conductor/arranger Andy Farber, who has arranged for, among others, Jon Hendricks, Wynton Marsalis, Bob Dylan, B.B. King and Ray Charles. They selected 8 classics from the Great American Songbook and between them they’ve crafted a perfect swing album.

Amongst the repertoire are three songs rightly “owned” by Frank Sinatra – ‘The Way You Look Tonight,’ ‘Come Fly With Me’ and ‘Luck Be A Lady’ and Mr Davis and producer Charles treat them with the right amount of respect while arranger Faber, though not aping the charts of Riddle and Jenkins, has clearly studied those maestros in considerable detail. Only on a version of the Platters’ ‘Only You’ can you expect something a little different to the original. Here the doo-wop ballad is given a classic swing treatment perfectly suited to Steven Davis’s rich, expressive voice. The genre clearly suits where the singer is now at. Indeed to be where he is now is a remarkable story. Steven Davis began his music career in gospel. Then a few short years ago, he almost lost his ability to sing altogether. Making his comeback, he suffered a severe vocal bleed with the possibility that he might never sing professionally again. After nearly a year-long period of intense steroid therapy and weeks of forced silence, he was given a clean bill of health and on the evidence of this collection he’s now set to join the ranks of the great swing “names”.