STEVE CROPPER; Fire It Up (Mascot/Provogue) 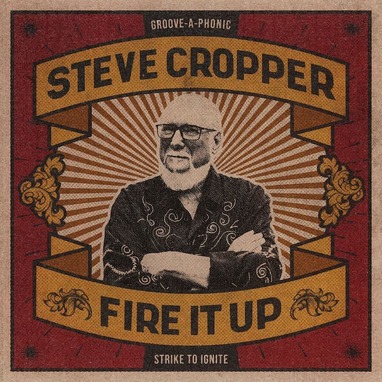 Memphis guitar man STEVE CROPPER needs no long introduction here. His career is rightly storied but, oddly, given his status, the man has released few solo albums. We think his last was 2011’s ‘Dedication’ but Steve himself says that this new collection is actually his first proper “Steve Cropper” long player since 1969. Maybe some that came between ’69 and now weren’t representative of his sound and style! For sure, the 13 tracker that is his new ‘Fire It Up’ harks back to the rough, brash 60s sounds of Memphis as was witnessed by the album-heralding single., ‘Far Away’. That one was/is a barking vocal with a Roger C Reale at the mic, gruffly trading lines with Cropper’s biting guitar work over a parping, brassy backing track.

Again, oddy, given that the guitar man is the marquee name, ‘Fire It Up’ consists mainly of vocal tracks. Of the 13 selections, only three are instrumentals and those are all variations on a tune called ‘Bush Hog’. In his notes Cropper explains the reasoning. He sees himself as a team player. First and foremost, he’s a rhythm guitarist, so here expect no flashy axe man pyrotechnics. Instead enjoy ensemble efforts with Cropper’s guitar providing the momentum – driving the groove. And if there’s a criticism to make of ‘Fire It Up’ is that there is, across the 13 tracks, little variation in that groove. Track after track is relentless and heavy. So that single, ‘Far Away’ isn’t that different to the album’s title track or ‘The Go-Getter Is Gone’ or ‘I’m Not Havin’ It’ and others. There’s some slight variation with the almost bluesier ‘Say You Don’t Know Me’ while ‘One Good Turn’ is the nearest the album gets to a ballad. Cropper’s lovely guitar introduction made me expect something like ‘Rainy Night In Georgia’ but, sadly, the song never gets anywhere near that Tony Joe White classic. Nice guitar solo though, but you’d expect that!

STEVE CROPPER: ‘Fire It Up’ released on Mascot/Provogue April 23rd.