STEVE COLE: Turn It Up (Artistry) 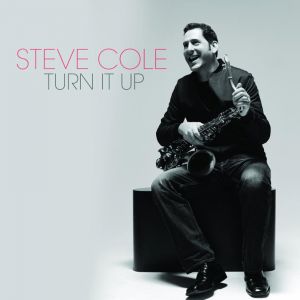 Students of chart placings and listeners of smooth jazz stations will already be familiar with an insidious little tune from sax man Steve Cole. The cut’s ‘Mirage’ and it’s just risen to #1 on Billboard’s BDS chart, a placing reflected by ‘Mirage’s’ heavy rotation on discerning music stations. The track is the first single from ‘Turn It Up’, Cole’s newest long player and those who are digging the tune will be delighted to know there are plenty more like it on the 10 tracker.

The title track, for instance, offers more of the same soul-inflected grooves (shades of prime time David Sanborn) while the opener ‘Sidechain’ is another bright n’ breezy, easy on the ear romp. ‘Workhouse’ is just a touch different…. Cole’s smooth jazz take on house. We’re told he’s a big fan of the Chicago house scene, but don’t expect it being play listed in Ibiza any time soon.

From a soul perspective, ‘Turn It Up’s’ USP is the album’s big cover, a version of Bobby Womack’s ‘Woman’s Gotta Have It’. It’s such a great tune isn’t it? And Cole doesn’t mess with it. He just lets his tenor glide over the melody lines while vocalist Keith Fluitt coos the title line sweetly… but he’s so far back in the mix you might not even notice.

Other guests on the album include Ricky Petersen, Khari Parker and Pieces of A Dream’s James Lloyd who adds pleasing, distinctive keys to ‘Bright Side’ – like everything else on offer here, a perfect summation of what contemporary smooth jazz is all about.