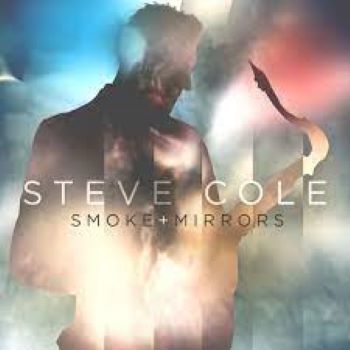 Latest album from smooth jazz sax man Steve Cole is the ten track ‘Smoke And Mirrors’. Like many recent music releases across all genres, ‘Smoke and Mirrors’ was recorded during the various lockdowns brought on by the pandemic. So, Cole and producer Dave Mann (whose keyboards also grace the album) were forced to work remotely or in socially distanced studio settings. Cole, though, found plenty of positives in that tricky situation. For starters, with so many musicians not on the road he was able to use plenty of “names” to help him out. So, with little or no work people like guitarist Bernd Schoenhart, trumpet and flugelhorn player Trevor Neumann, organist Ricky Peterson, bassists Mel Brownand Mark Egan and drummers Brian Dunneand Todd Suchermanwere delighted to help Cole and Mann flesh out their ideas – albeit chiefly remotely. The result is a consummate, slick and polished smooth jazz album – but with those listed players and that marquee name, that’s what you’d expect.

Cole nails his colours to the mast with the bright, breezy opener, ‘Living Out Loud’ – a smooth jazz, groove-based, all genre box-ticking workout. And there’s more of the same on the album title track, ‘On the Money’ and the cheery ‘Covent Garden’- a sort of homage to that unique London district where Cole stays on his annual trips to England which right now he’s sorely missing out on.  The mid-tempo ‘Wayman’ is another hugely personal cut. It’s a tribute to the late NBA player-turned bassist Wayman Tisdale, with whom Cole recorded the bassist’s 2001 tune ‘Loveplay’. Cole tells us that Tisdale was also an inspiration behind that opening cut – Cole conceiving the melodies on bass à la Tisdale.

The album’s slower moments include ‘At A Distance’, ‘Trust’ and the poignant closer, ‘Justice’, Cole’s musical reaction to the killing of George Floyd, mere miles from Cole’s home in Minneapolis, and the ensuing protest movement. The album is out now.