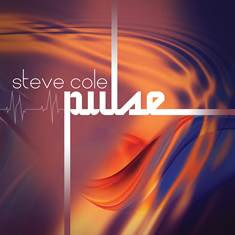 For his latest album Chicago sax man Steve Cole returns to his R&B roots with a ten track set that’s heavy on infectious melodies and soulful grooves and he hits the ground running with the opener – the LP’s title cut. ‘Pulse’ is a horn-heavy chunk of instrumental soul that sees Cole’s tenor supported by a three piece horn section – Trevor Neumann’s trumpet, Dan Levine’s trombone and David Mann’s alto sax. The same trio are on hand for another of the album’s heavy hitters, ‘Do Your Thing’. Shades of Curtis Mayfield’s ‘Move On Up’ about this one – hardly surprising… Cole’s a huge fan of soul’s Gentle Genius. The set boasts a second homage – the intricate ‘Minty Fresh’ is Cole’s tribute to one of his favourite vocal groups, Mint Condition. Other noteworthy original tunes include the laid back ‘With You All The Way’ and the slower ‘Looking Up’.

‘Pulse’ also offers two great covers. First up there’s a respectful treatment of the Friends Of Distinction’s ‘Going In Circles’. Always a great tune, Cole’s version has been shaped by the live renditions that were always showstoppers in his Chicago club days and is enhanced by an ethereal backing vocal from Nicki Richards. She’s also on hand for a take on the late Bobby Bland’s ‘Ain’t No Love In The Heart Of The City’. Here the lead vocal comes from Cole’s guitarist Rico McFarland and though he lacks the grit of “Blue” Bland, Cole’s sax lead brings out all the song’s inherent desperation. Both these covers come highly recommended and like the rest of the collection represent a side of Cole that’s the opposite to the one he offered up on his last album ‘Moonlight’. Where that was a gentle, insinuating affair, ‘Pulse’ is in your face. It might be filed away under “smooth jazz” – but there’s nothing smooth about ‘Pulse’. .