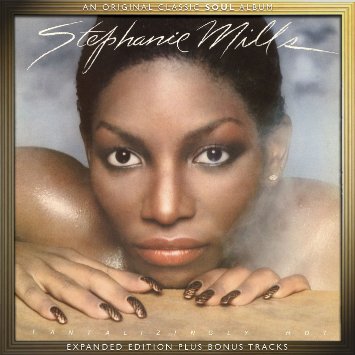 Most soul folk know something of the Stephanie Mills story. She made her name, of course, as a Broadway child star before being whisked away to Motown to work with no less a personage than Burt Bacharach! Then she worked for a succession of labels enjoying a decent run of hits, peaking in the early 80s. She’s still very much involved in the business and just last year she performed in a revival of the show that got her started – ‘The Wiz’. This time though she played Aunt Em, not Dorothy!

In 1981 Stephanie signed to Casablanca Records and here Caroline Records reissue her ’82 ‘Tantalisingly Hot’ long player for the label. It’s hard to know the raison d’être behind the reissue. Yes, the 8 tracker is a decent album … very much a product of its time, but there’s nothing particularly especial about it. Even hardened Mills fans prefer her earlier work, often citing the 1980 20th Century eponymous set as her best. Whatever, here you get a selection of slick dancers and smooth ballads with the Ashford/Simpson ‘Keep Away Girls’ taking honours as the LP standout. When released a single the tune hit #13 on the US R&B chart. Ms Mills also offers a workmanlike version of the same duo’s Motown chestnut, ‘I Can’t Give Back The Love I Feel For You’. Elsewhere there are couple of Mtume/Lucas dancers but neither are essential and the inclusion of the 12″ version of ‘You Can’t Run From My Love’ as a bonus doesn’t really make the reissue that much more tempting