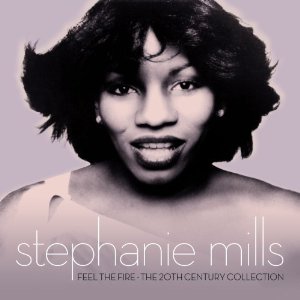 Brooklyn’s Stephanie Mills became a star on the back of the Broadway production of ‘The Wiz’. Quickly dubbed “the little girl with the big voice“, she was soon snapped up by Motown for whom she recorded one full LP. However, despite the input of Burt Bacharach, the album meant little and Stephanie moved on to 20th Century Records, where, working with James Mtume and Reggie Lucas, she became a major recording star on the back of three albums – ‘What Cha Gonna Do… With My Lovin’, ‘Sweet Sensation’ and ‘Stephanie’. Long out of print, all three are now collected together on this new, 2 CD pack from Hip-O Select.

Listening, it’s not too hard to hear why she succeeded with 20th Century rather than at Motown. Working with Bacharach and David, the young singer (she was just 18) was portrayed in far too sophisticated a way; Mtume and Lucas, though, knew and understood the late 70s/early80s vibe and the music they pitched at Stephanie was just right for the times and for her. They had her record frothy dance items and heart wrenching ballads – both filled with the clichés of good times and love lost and found. The duo (and their lavish productions) captured the zeitgeist of the age.

Two cuts amongst the 30 on offer here still shine out. They are the evergreen ‘What Cha Gonna Do With My Lovin” and the Teddy P collaboration that is ‘Two Hearts’. There’s a few other tracks on which Mtume and Lucas tried to weave the same magic – but didn’t quite manage to; while some of the other faster items (like ‘You Can Get Over’ and ‘Put Your Body In It’) haven’t travelled down time particularly well. The slower items have survived much better. ‘Deeper Inside Your Love’ is sweet while there’s always a place for a cover of Peabo Bryson’s ‘Feel The Fire’.

The set comes with all the usual Hip-O Select accessories – bonus cuts, great notes, professional annotations and evocative pictures and album pack shots. As a summary of where a great (and sometimes overlooked) soul stylist was at an important stage in her career, the collection is spot on.