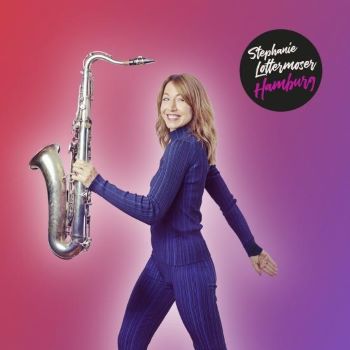 Stephanie Lottermoser is a German smooth jazz/fusion saxophonist and occasional vocalist. For the past few years, she’s been living in Hamburg, a city which she absolutely loves.  Stephanie says: “In September 2018 I set out for the city on the river Elbe with only two bags and I haven’t regretted my decision ever since. The Hamburg scene is surprisingly outgoing, open and supportive. Hardly anyone here is a lone fighter. I felt immediately welcome and wholeheartedly accepted.”

For her latest album, Fraulein Lottermsoer returns the love her new hometown as shown her with an 11-track selection which she says, “does not only focus on the city itself but lets the eye wander further away”. Oddly, maybe, though the music was written and arranged in Hamburg, the album was actually recorded in Berlin.

Given that the album is dedicated to Hamburg, maybe the logical place to start is with the track ‘Morgen (Hamburg)’. It’s meant to be a welcome to the city as dawn breaks and indeed the tune has a distinct impressionistic/cinematic feel. Oddly (again), it’s not the opening track. It comes in as track 6; the album’s opening track is actually ‘Cory’ – a brash and funky workout in tribute to Vulfpeck guitarist Cory Wong. The Hamburg connection isn’t clear to me. Indeed, that’s the case with many of the other tracks. Maybe they’re the ones which allow the eyes (ears?) to wander further away. Sonically those tracks are workmanlike smooth jazz/jazz fusion – some are perkier than others (like ‘Letter To The Inner Child’), some are chiller and more atmospheric than others (like ‘Karma’)

Then there are the three vocal offerings; two are covers, versions of Daft Punk’s cool ‘Within’ and Waylon Jennings’s country, waltz-ified, ‘Dreaming My Dreams With You’; the third vocal is the most promising. It’s an original tune, ‘What Kind Of Love Song’ and it’s actually a decent, if mournful, blue-eyed soul outing with soulful Hammond stabs from Till Sahm and a lovely sax solo from Steph.

Stephanie Lottermoser’s ‘Hamburg’ is out now.