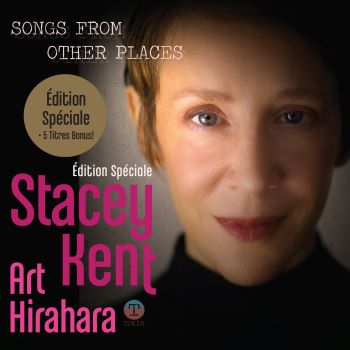 Like many artists, jazz chanteuse STACEY KENT found new ways to communicate with her fan base during the various covid-enforced lockdowns. Essentially she carried on making music and released new recordings as digital singles on a regular basis. Each song was carefully chosen and they reflect both Stacey’s semi-itinerant lifestyle and how she sees herself not as a jazz singer, but more a “musical storyteller”. Born in New Jersey and now living between Colorado and North London whilst also spending plenty of time in continental Europe, Stacey is a world citizen and like us all she clearly felt physically constrained by the lockdowns, so the songs she selected to work on reveal the universal longing at that time of lockdown for movement, travel and the outside world.

The best known and most downloaded of Ms Kent’s ten lockdown songs was ‘I Wish I Could Go Travelling Again’which just about sums up what many felt. Amongst the other songs were Antonio Carlos Jobim’s ‘Bonita’ and ‘Imagina’, Raymond Lévesque’s ‘Les Voyages’, the Kurt Weill/Ira Gershwin song ‘My Ship’, Paul Simon’s ‘American Tune’ , the Beatles’ ‘Blackbird’ and ‘Tango In Macao’ (written by Nobel Prize winning author, Kazuo Ishiguro, together with Stacey’s long-time collaborator and husband, Jim Tomlinson). So, yes, plenty of diversity – especially in terms of their geographical references, so when Ms Kent and her label, Candid decided to issue the song cycle as one album the obvious choice for a title was ‘Songs From Other Places’ – reflecting Stacey’s and mankind’s desire to satisfy their wanderlust! Right now you may not be able to jet off to wherever, but at least you can join Stacey on her musical journey.

The album opens with the aforementioned ‘I Wish I Could Go Travelling Again’ (an obvious choice for a starter) and its soundscape sets the tone for what is to come…. Gentle, late night, dinner jazz with Ms K’s beguiling vocals supported beautifully by long-time friend Art Hirahara’s piano. Apart from the songs mentioned above you can also enjoy a cover of Stevie Nick’s ‘Landslide’ and a Celtic flavoured ‘Cragie Burn’ – another original from Kazuo Ishiguro and Jim Tomlinson.

To make investigation and purchase more tempting, the album offers five bonus tracks – including gentle versions of Bob Marely’s ‘Three Little Birds’ and Carole King’s ‘So Far Away’ – all featuring the same stripped back, gentle sounds of the ten lockdown recordings. The treatment of Bill Wither’s ‘Lovely Day’ is truly lovely… intimate yet expansive, just like the whole album.