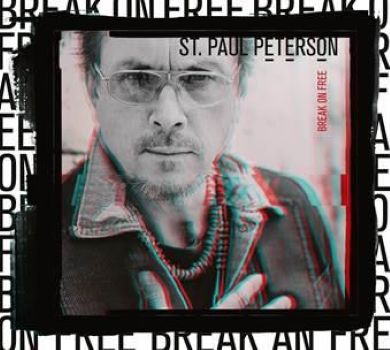 Prince connoisseurs will know about the Peterson family of Minnesota. Over the years they’ve collaborated in all kinds of ways with the Purple One. In particular, multi-instrumentalist, PAUL PETERSON struck up a very close working relationship with Prince. Discovered aged 17 and dubbed “Saint Paul”, he worked with Prince in The Time; he featured in the ‘Purple Rain’ movie and worked with The Family. Since then, he’s worked solo and as a writer and producer. He was also the musical director and front man for the touring show ‘Nothing Compares 2 Prince.’  Prolific in his own right, Peterson has just released this, his fifth album as a leader and his debut for Leopard Records.

Given Peterson’s CV you’d be right to guess that ‘Break On Free’ offers some Princely flavours and purple hues. Indeed the album’s title track (which opens the LP) is punchy Prince  funk with biting guitar work from guest player Eric Gale. ‘Something In The Water’ (Peterson’s explanation as to why his home city has a funky reputation) is a lot lazier but still in the realm of Paisley Park funk. ‘You Got 2 Love’ channels the classic Minneapolis Sound too; ditto the meandering, bluesy ‘Blue Cadillac’.

However, the 12 tracks offer much more than the artist’s well-meant homage to his erstwhile paymaster. So, ‘I Couldn’t Do It Without You’ is quality blue-eyed soul in the manner of Hall and Oates. Interestingly the album includes a sort of H&O cover – ‘Minnie Forget Me Not’, an adaptation of the duo’s ‘Philly Forget Me Not’. It features a rap from Leon J which sounds just a little at odds with the cut’s soundscape. The album’s other big covers are fairly faithful treatments of Stevie’s ‘Love’s In Need Of Love Today’ and Robbie Robertson’s ‘Broken Arrow’. For something different ‘Big City’ is a heavy rocker while at the other end of the sonic spectrum, ‘Another Glass Of You’ and ‘Beauty Beyond The Darkness’ are gentle affairs. The album’s sweetest offering though is the final track – ‘Song for Julie (Forever I’ll Love You)’ – Paul’s tender paean to his wife.

So, yes, plenty of variety here on ‘Break On Free’. Peterson says: “I’m at a point in my life where I’m OK with having multiple genres on the same record. I remember early in my career with MCA and other major labels that having those different sounding songs would ‘confuse the public or radio promoters.’ At this point, I think versatility is a good thing. I’ve been lucky enough to record in so many different genres, that it’s not something I’m trying to do intentionally, it’s just what comes out.”