ST. PAUL & THE BROKEN BONES: ‘Half The City’ (Single Lock) 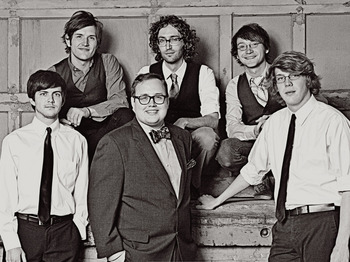 Led by the raspy, declamatory delivery of gospel-reared vocalist Paul ‘St Paul’ Janeway – think Otis Redding meets James Carr – this blue-eyed Alabama-based soul sextet follow up their recent EP ‘Live And In Person’ with their debut album for the fledgling Single Lock label (an imprint founded by John Paul White and Alabama Shakes member, Ben Tanner). The set, a carefully crafted 12-tracker that takes its inspiration from the old school soul tradition was recorded at the legendary Muscle Shoals studio in Alabama. With their blaring horn blasts, churchy organ licks and penchant for crisp back beats, the group sound like they’ve emerged from a time capsule that was buried in 1967.

But what they’ve created on this throwback-sounding album isn’t just a hollow pastiche of soul music from times past – there’s a fervent, almost palpable, passion in what they do and what they do sounds natural rather than forced or contrived. And like other soul revivalists – such as Sharon Jones & The Dap Kings – they don’t just regurgitate sounds from the past but add something of themselves to it as well. The end result is something truly timeless and it’s no wonder that the US mag, Rolling Stone, as well as UK broadsheets, have hailed the group’s evocative retro-soul grooves as something to marvel at.

But style isn’t everything and the group also know how to craft good songs. They excel at incendiary heartbreak ballads – such as ‘Grass Is Greener’ and the tortured confessional ‘I’m Torn Up’ – but can also churn out some fleet-of-foot dance grooves. Of the latter, the stomping ‘Sugar Dyed’ (the lead off cut on their recent EP) impresses while the slightly slower and mellower ‘Call Me’ sounds like something that could have been cut at Stax in the late ’60s. As an instrumental ensemble, the sextet is tight and dynamic while their adroit arrangements are also on the money. But the icing on the cake is Janeway’s incredibly soulful vocals, which at times – especially on the slow ballads – achieve a cathartic intensity. A mighty impressive debut.