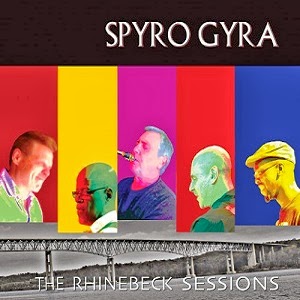 ‘The Rhinebeck Sessions’ is Spyro Gyra’s 30th album. Named for the venue where the 9 tracker was recorded, the set won’t disappoint the band’s legions of fans. The musical recipe on the “sessions” is as before, though the background to the music is just a little different. Beckenstein’s boys debuted back in 1977 (their brand of jazz was dubbed “fusion” back then) on an indie label and as success beckoned their albums ended up on big labels and were, by and large, carefully planned affairs recorded over a long period. For this newie Spyro Gyra have gone back to their roots, so to speak. The whole LP was written “in the moment” i.e. in the studio as they were recording and the whole process took just three days and with the release on an indie label it was all quite a gamble… but it seems to have paid off. The new process has made the band’s sound fresher and much more spontaneous than anything you’d expect from a smooth jazz album.

To get this new feeling try the almost free-form closing track that is ‘Who Knew!’… sounds like the band didn’t know where the jam was leading… who knows indeed! Then there’s the loose-limbed ‘I Know What You Mingus’ – almost as good as the 8 minute opener, ‘Serious Delivery’ on which intentions are declared from the kick off. Smoothest outing is ‘Wishful Thinking’ but even that one is built on a strong groove and features some star solos while the rockin’ ‘Clubhouse Jam’ is just that.

Band leader Jay Beckenstein has declared that the aim behind this album was to get close to the music the band play at their live shows; it seems they’ve succeeded.