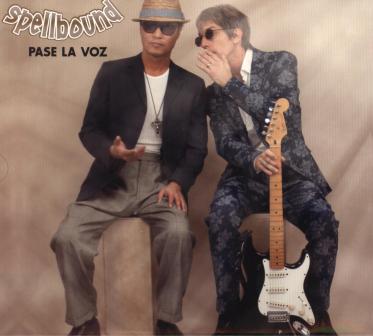 Spellbound is an LA-based music duo – Bobby Moon (keys, percussion and vocals) and Paul “Pablo” Thomas (keys, guitars, percussion). The pair have enjoyed a good career in and around LA since 1999, when their debut long layer, ‘Funqueros’ was a local hit and won them countless bookings in the dance clubs and bars of the City of Angels where they’re still a major draw. For this, their latest album, Spellbound have, for the first time, released a set that totally focuses on the dance side of their repertoire… in essence they’re doing what they feel they do best – crafting music for the feet.

As the album title implies ‘Pase La Voz’ (“pass the word”) has a fair share of Latin-based tunes. ‘Viene Y Va’ is perhaps the best example though the LP’s title cut is great samba school romp too. Elsewhere the music is a mix of rock, funk and pop. The tune that best sums up the album’s sound is ‘Army Of Love’. It’s a crunchy. rock item with clever lyrics and a hint of Prince style innovative funk about it. Hard to describe, but maybe the Fun Loving Criminals is a good reference point. In other places the sound is, I think, too poppy for the soul and funk purists (I’m thinking of ‘Going Grey’… anyone remember 10CC?) but with people like Grammy winning sax man Scott Martin and Cuban vocalist Margaret Young in their corner, Spellbound’s music is never less than intriguing. Find out more @ www.spellboundband.com