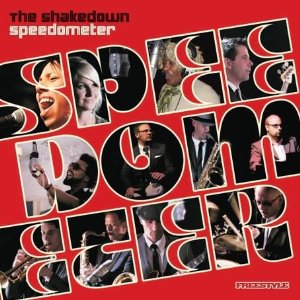 Speedometer are a hard-gigging UK soul band. Led by Leigh Gracie, they specialise in tough-edged soul-funk and they’re an automatic choice as backing band for visiting funkateers. ‘The Shakedown’ is the band’s sixth album and it marks a subtle change of direction in that it features more vocal cuts than their previous outings. Pick of those vocals is a cover of Brenda Holloway’s ever-lovely ‘You’ve Made Me So Very Happy’. It features band regular Ria Currie on vocals and it seems that the band know she lacks the high end emotional intensity of the Motown diva. Therefore, the song has been given a delightfully light arrangement – totally avoiding the bombast of the Blood Sweat And Tears version. Ria’s right at home with its subtle shuffle and she even gets to add some bars from ‘Am I The Same Girl’ to it. It’s a lovely, understated cut. Ria’s also spot on on her duet with Myles Sanko on a version of Eddie Bo’s funky ‘Lover And Friend’ while Natasha Watts handles ‘Again and Again’ and ‘Take Me On’ with equal aplomb. Star vocal guest, though, is ex James Brown Revue singer, Martha High who doubles with Sanko on the bass- heavy title cut and the pacey ‘Dragging Me Down’ which features some frantic organ and great call and response backing vocals from the Silhouettes.

There’s also plenty of driving instrumentals and on the Latin-flavoured ones the boys have enlisted Snowboy to add his famed percussive weight – notably to ‘La Nueva Manera’ and ‘Orisha’. The album ends with ‘Kool To Be Uncool’ – a typically loose-limbed Speedometer workout and a satisfying way to end the set – both musically and in it titling. Speedometer may lack the sophistication and polish of big name soul outfits, but what they lack in those departments they make up for in their honesty, commitment and attack. They make cool, organic soul and funk and if you enjoyed last year’s outings from bands like the Bamboos and Cookin’ On Three Burners, I’ll guarantee you’ll love this.