SOUTHERN AVENUE: Be The Love You Want (Renew Records) 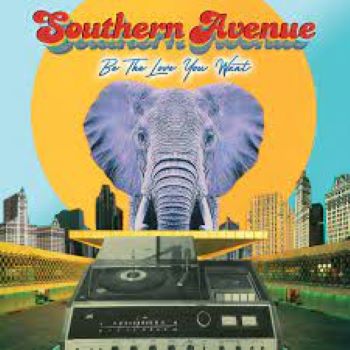 SOUTHERN AVENUE is a Memphis-based, self-contained band. They debuted in 2016 with an eponymous  album on the revitalised Stax label. That was followed by 2019’s ‘Keep On’. Both collections won the band lots  of support especially amongst  the blues/rock fraternity. ‘Be The Love You Want’ is the outfit’s third album and they say that the collection focuses on self-love, self-empowerment, personal accountability and pushing forward. That message is wrapped in a largely blues-based rock soundscape that’s not entirely representative of the classic Memphis soul sound.

The nearest Southern Avenue get to that sound is on ‘Let’s Get It Together’ –  a searing ballad highlighting the power of vocalist Tierinii Jackson whose passionate delivery is swathed in a gentle brassy warmth courtesy of a guest horn section who’ve clearly taken Stax and Hi as their reference points. The more up-tempo ‘Love You Nice And Slow’ has a proper soul undertow too. The other really noteworthy inclusion is the A-Capella ‘Heathen Hearts’ – just joyous voices and gospel hand claps!

Elsewhere Ms J’s passion gets the full power treatment on rocky outings like the LP’s title track which opens proceedings. She needs to go full pelt to compete with Israel-born guitarist Ori Naftaly’s guitar god ambition! That ambition was apparent on the album’s lead single – ‘Move Into The Light’ which was co-written by  pop star Jason Mraz.

So, yes, a Memphis group who work hard and play  with power and passion but don’t quite achieve classic Memphis soul status. But heres’ the thing, that’s not what Southern Avenue is about. They clearly respect the city’s heritage, but they want to evolve the sound to contemporary effect. Check their progress when the album gets official release on August 27th via Renew Records.