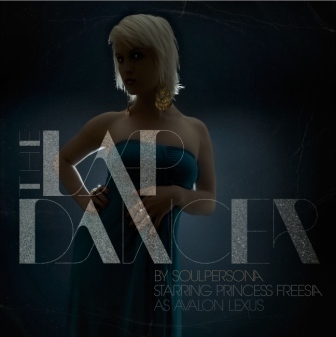 Soulpersona is a musician, producer and arranger from North London. As his name implies he’s a soul head with a passion for the genre that goes way back. In 2009 he debuted with his first album – ‘Soulcoaster’ – and it made considerable underground waves. Since then he’s been working with Jocelyn Brown on her new album and putting the finishing touches to this – his own brand new album.

He describes the music on ‘Lap Dancer’ as the “soundtrack to a movie that’s never been made”. Indeed insert the album into your i-tunes programme and it defines its genre as “soundtrack”.

The putative movie tells the story of an erotic dancer – Avalon Lexus, who plies her craft at the Club Babylon and the music tracks the vagaries of her life and with song titles like ‘Pocket Rocket’, ‘Ava’s Fantasy’ and ‘Play Me Like A Fiddle’ you quickly get the idea. The soundscape that Soulpersona has chosen to deliver his ideas is the slinky soul of the 80s, though he gives it a definite contemporary tweak chiefly through the vocals of Princess Freesia – who has a lightness of touch that’s a million miles away from the big voiced divas of the 80s. It must be said though that her light, almost airy approach invests the music with just the right amount of eroticism which then story merits… witness her semi-spoken input on ‘The Lap Dancer Theme’.

Musically there’s plenty of variety with beaters, mid-tempo groovers and quite storm moments. Best of the “up” tunes is the funky, bass-heavy ‘A Girl’s Got To Get Her Loving’, while the aforementioned ‘Play Me Like A Fiddle’ is the best of the slinky mid-tempo moments. Of the ballads, ‘Ultrasuperlove’ takes honours… but in fairness this album’s not about cherry picking tracks. Soulpersona has set about to create a seamless cinematic opus and he’s succeeded – nowhere more successfully than on ‘Hot Shower Interlude’ which gives Teddy P and Barry W a real run for their collective monies… yet it totally avoids crassness. It’s a most interesting cut on a very intriguing album. Find out more at www.digisoul.com