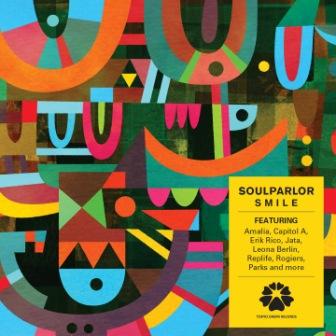 SoulParlor (their choice is to omit the space between the words) is a German based production and DJ team…. Frank Jensen, Frank Lotz and Tobias Müller. The collective began in the Rhineland area some 15 years ago and have since broken out (they began as break beat specialists) to work all over Europe and throughout the States. For a time, they ran their own label, Sense Music, but since 2010 the crew have been pacted with Tokyo Dawn and over the years their sound has diversified…. embracing hip-hop, house, funk and soul…. they’ve even had the balls to remix some of James Brown’s music! What the Godfather would have made of their efforts we’ll never know. Their JB tweaks (along with their takes on the other genres) were spiced with the SoulParlor signature electro sound and if that’s what floats your musical boat there’s plenty on this new 15 tracker to keep your ship sailing!

Interestingly, given the current interest in the Mark Ronson style of funk there are few tunes that echo what music’s current poster boy’s up to. ‘Get It How You Want It’ and ‘The Groove Is On’ boast that snappy but sparse cod Prince sound. The vocalist on that latter, Raziel Jamaerah, by the way, does a great “tonight Matthew I’ll be the Purple One”. There’s more retro on ‘Hybrid Funk’ – a kind of SOS Band pastiche while the aptly titled ‘Nostalgia’ offers a twist on the Warren G style of rapping from Capitol A while vocalist Leona Berlin does some great wailing behind his rhymes.

Elsewhere? Well, expect plenty of bumpy broken beaters that are musical grooves rather than proper “tunes”. The most-focused of the cuts is the housified ‘IO’. Leona Berlin, again, supplies a suitably soulful vocal – riding on a loping bass line. It could well interest the soulful house heads who don’t mind the electro effects… and for me that’s the big problem with the album. Old fashioned curmudgeon that I am, I’ve never been happy with the shotgun marriage of soul and electro…. but, hey…. what do I know!