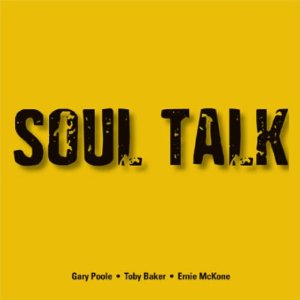 The music on this album has been around for some time. Key tracks from ‘Soul Talk’ have already been played both on internet soul stations and in discerning modern soul rooms, but now the set has won a “proper” release on Ralph Tee’s Expansion label. It’s easy to hear why. Generally the music fits neatly into the Expansion template; that’s to say (with a couple of exceptions) it’s all “up” and danceable; there’s also a polish to the sound that is a cut above your average indie soul production; then there’s the real soul feel that underpins everything. In Gary Poole, Soul Talk have a fine interpretative singer who has clearly benefitted from his association with D’Influence. Equally, it’s clear the band’s two other members – Toby Baker and Ernie McKone- have also profited from working with the likes of Chaka Khan, Candi Staton and Marlena Shaw.

All those influences come together best on the LP’s standout cut – ‘Really Don’t Mind’. The tune sort of defines what modern soul is all about and the Cool Million boys (who know a thing or two about the genre) offer a mix on it at the end of the set… and you can pick from the 7″ and 12″ versions too. The album’s other standout is ‘Loving You’ which is a pleasing, plodding mid-tempo item. For some reason the lazy beats and effortlessness remind me of Drizabone and ‘I Want It’ is almost as good. Elsewhere, I do know that some soul folk found ‘Free’, ‘Won’t Come Easy’ and ‘Keep On Moving’ a touch too poppy, though you can’t fault Poole’s vocals. He’s in fine voice on the LP’s big ballad – ‘Guess You’re Leaving ‘and he even makes a good fist of the album’s only cover – a version of James Taylor’s ‘Fire And Rain’. I know the song was recorded by many soul artists in the 70s – but it was dreary then and is still dreary now. It seems an odd choice for an album like this and possibly makes things like ‘Really Don’t Mind’ sound even better.