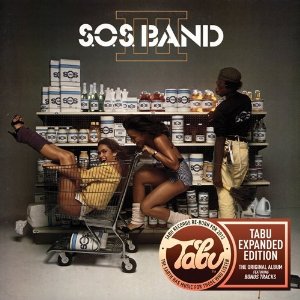 In the minds of many soul fans, Atlanta’s S.O.S. Band will forever be associated with stellar producers/songwriters, Jimmy Jam and Terry Lewis – that’s because Jam & Lewis helmed the Atlanta-based group’s big ’80s hits for Tabu in the shape of ‘Just Be Good To Me,’  ‘Just The Way You Like It,’ ‘The Finest’ and several others. But the production duo’s association with the group began in 1982 when they penned (but didn’t produce) ‘High Hopes,’ for their third album, which has just been reissued with bonus tracks.

‘High Hopes,’ with its infectious chorus, slick mid-tempo groove and catchy synth hooks, is by far the stand-out track on ‘III.’ Though husky-voiced Mary Davis fronted most of the S.O.S. Band’s classic singles, male vocalist Abdul Ra’oof handles the vocals and makes a good job of it with his soulful delivery. Another male singer, Jason Bryant, also takes the lead on a couple of tracks (the rather pedestrian ‘Good & Plenty’ and ‘You Shake Me Up’), with Mary Davis singing lead vocals on four cuts, though most of them aren’t that memorable. Much better than those tracks is ‘Groovin’ (That’s What We’re Doin’),’ a mellow, piano-led instrumental that’s right out of Patrice Rushen’s bag and which was a club favourite in the UK (as part of the bonus material you get the extended ‘special’ version).

I think it’s fair to say that the SOS Band were in a transitional phase with ‘III’ – apart from the excellent ‘High Hopes’ and ‘Groovin” there’s not much quality in terms of the material and the whole set is patchy and lacks cohesion. That would all change with their next LP, ‘On The Rise,’ where Messrs Jam & Lewis would take the helm, change the group’s direction and by dint of their magical musical alchemy would transform the SOS Band into consistent hit makers with a series of memorable chart smashes. Still, it’s good to see ‘III’ reissued if only to hear ‘High Hopes’ again.