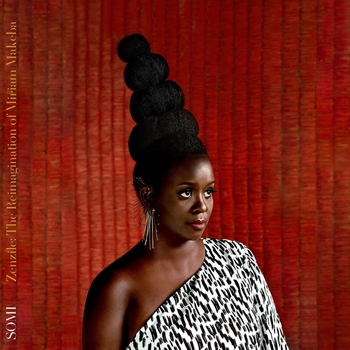 Though she was born in Champaign, Illinois, and is now based in New York City, the multi-talented Somi Kakoma is understandably proud of her African heritage and specifically her Ugandan and Rwandan ancestry. She’s not only a Grammy-nominated singer, songwriter and record producer but also a playwright and recently starred in an acclaimed stage musical she wrote called Dreaming Zenzile, which is due to transfer to Broadway later this year. The show is a celebration of the life and art of a bonafide giant of African music; the legendary South African singer and political activist, Miriam Makeba, whose life and work is the focus of this new album. (In case you’re wondering, ‘Zenzile’ was Makeba’s first name).

‘Zenzile: The Reimagination Of Miriam Makeba’ is Somi’s eighth and arguably most impressive long-player to date. It’s an accomplished 17-song homage to Africa’s “First Lady of Song” and repurposes some of Makeba’s key tunes, bringing them alive with fresh arrangements that are contemporary yet chime with the spirit and authenticity of the originals. Somi recruits several big names to help bring her musical vision to life, including the ubiquitous Gregory Porter – on the succulent, jazz-tinged duet, ‘Love Tastes Like Strawberries’ – Angelique Kidjo (who graces ‘Jike’lemanweni,’ driven by percussive vocal sounds and jazzy horns), and the group Ladysmith Black Mambazo, whose opulent layered harmonies feature on  ‘Nonqonqo’  with its thrilling call and response interplay.

Somi’s jazz-meets-Afrobeat retooling of ‘House Of The Rising Sun’ – a traditional American folk-blues number that Makeba recorded four years before The Animals cut their hit version – is another standout while other highlights include the jubilant, life-affirming ‘Hapo Zamani’ with its African township rhythms; the breezy ‘A Piece Of Ground’; and a rousing anthem entitled ‘Kwedini.’

Although ‘Zenzile: The Reimagination Of Miriam Makeba’ is a warm and heartfelt tribute to a revered goddess of African music, it’s also a testament to Somi Kakoma’s intrepid musical vision and formidable artistry.