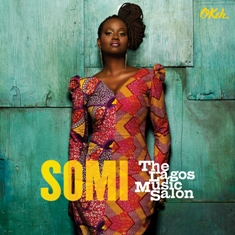 Born in Illinois, soul and jazz singer, Somi, relocated to Lagos to record this album – her major label debut and the follow-up to the acclaimed ‘If The Rains Come First’ The circumstances of the move are poignant. Her mother and father were African immigrants and soon after the release of her debut long player, her father died. Devastated, Somi was advised by her musical mentor and close friend Hugh Masekela to visit Africa to connect with her roots and heritage and fulfil her potential as a global music maker. The result is ‘The Lagos Music Salon’ – an 18 tracker that melds soul and jazz with Afrocentric flavours and issues.

The album’s centre piece is ‘When Rivers Cry’. It’s the set’s most complex item – featuring a children’s chorus, melancholy violins and a rap from Common. It has a real sinister feel to it. More optimistic is the lovely ‘Ginger Me’ – a delicate ballad which shows off the depth of Somi’s voice.

Other album highlights include the sombre ‘Brown Round Things – a lament about the Lagos prostitution problem – it feature some Hugh Masekela style trumpet; ‘Two Dollar Day’ –a wry comment on the poor pay rates for Nigerian labourers; and ‘Four One Nine’ – all about Nigerian initiated e-mail swindles and scams. Not your normal soul and jazz themes. Neither is the harrowing Nina Simone-inspired ‘Four African Women’ – dealing with genocide, skin bleaching, female circumcision and prostitution.

Yes, ‘The Lagos Music Salon’ isn’t an easy listen but through it all Somi’s inspired voice shines loud and clear. In places you can hear the influences of great jazz stylists like Carmen Lundy; elsewhere the influence seems to be the early neo-soul crew. The spoken word closer, ‘Shine Your Eye’, is very Jill Scott… but of course a Jill Scott filtered through African eyes.