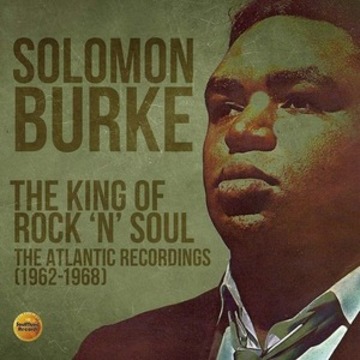 Along with fellow black music pioneers Ray Charles, James Brown and Sam Cooke, Solomon Burke was one of the key figures in the birth of what became known as soul music in the early 1960s. Born in Philadelphia, Burke was preaching from his local church’s pulpit before he was 10 and as an adult juggled music-making with work as a mortician as well as undertaking various entrepreneurial enterprises (which including selling popcorn and snack food at his live shows). Though his career, which spanned the years 1955-2010, was a long and fruitful one, undoubtedly his most impressive work came during a fertile seven-year spell at Atlantic Records during the 1960s, where he scored his biggest US hits. That period is the focus of a superlative new 3-CD compilation from the SoulMusic label, which contains every note that Burke recorded for Ahmet Ertegun’s famous label between 1962 and 1968.

The compilation, masterminded and annotated by Bob Fisher, contains 79 tracks presented in chronological sequence and begins with three sides Burke recorded for the Philly-based Singular label, which were purchased by Atlantic. They include the rock and roll-favoured curio, ‘Be Bop Grandma,’ which turned up as the B-side to Burke’s first Atlantic hit, 1961’s ‘Just Out Of Reach.’ That record was a landmark one; the first instance of an R&B singer covering a country and western song and taking it into the pop charts. Its success paved the way for other black artists to marry country music with rhythm and blues, including  Ray Charles, who recorded a complete album of Nashville tunes the following year (‘Modern Sounds In Country & Western Music’).

For many people, though, Burke was at his best working under the genius producer Bert Berns, who was responsible for creating some of the singer’s more R&B-oriented sides; like the finger-clicking 1965 track ‘Got To Get You Off My Mind’ (Burke’s only US R&B chart-topper); the epic ‘Cry To Me’; a wonderfully mournful ballad called ‘If You Need Me’; and the stomping ‘Everybody Needs Someone To Love,’ an uptempo track later recorded by the British group, The Rolling Stones, and which in 1980 was given a new lease of life by the ersatz soul group, The Blues Brothers.

For those wishing to dig deeper and venture beyond the hits, this comprehensive retrospective, which includes five-albums’ worth of material plus a slew of non-album sides, offers an opportunity to explore Burke’s Atlantic catalogue in forensic detail. Not everything he recorded was impeccable but even his stylistic missteps and aberrations were compelling because he poured his heart and soul into everything he recorded. His unique voice – silky on some songs, raspy and declamatory on others – is one of soul music’s great instruments but, sadly, it has been often overlooked, even by so-called experts of the genre. Hopefully, this superlative collection will help the late “King of Rock ‘N’ Soul” regain his regal status.