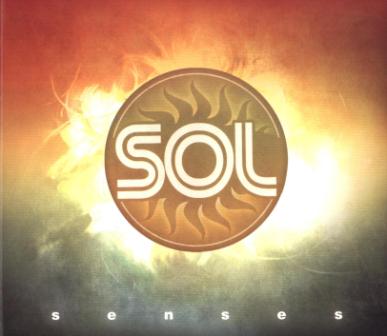 Sol is a five piece soul and funk band that works out of Maryland. At the band’s core are drummer Michael Henne and guitarist Jody Mosser. The duo were both in a group called Dimestore but when it folded the pair decided to push on; thus they embarked on a new musical odyssey with the express intention of crafting a new sound – but a sound with its roots in the heritage of the music they loved – soul and funk. First they brought classically trained cellist Jessica Sammis on board then soon added a lead vocalist – Paul Barrett. Barrett (a.k.a Toussaint The Liberator) had previously worked with people like The Dave Matthews Band, Wyclef and Soulive. The final piece in the Sol personnel jigsaw was Rebecca Racusin – a violinist who immediately gave the band extra string appeal, explaining, maybe, why Sol describe their sound as a cross between Jamiroquai and The Electric Light Orchestra. A quick listen to Sol’s debut album, ‘Senses’, though, reveals that there’s much, much more to the band than that. Sure there are hints of Acid Jazz in the mix and with a cello and violin in the front line there’s bound to be comparisons with ELO though in places that string sound is closer to that achieved by Dexy’s Midnight Runners. However the Sol signature sound on the 11 tracker is far tougher and rockier than anything those three outfits produced and in their “liberated” vocalist, Sol have a true soul stylist that could give John Legend a run for his money. Best maybe to say that though there are all kinds of derivitative colours on the Sol palette, what they produce is unique.

Hear the Sol sound at its best on the quite lovely ‘Mad At Love’. The opening, lugubrious string intro gives no clues to the crisp, building beater that follows’ ‘Heavy Rain’ is another winner. Dramatic and tense, it shows that you don’t need gimmicky rain effects to create a metrological impact and to make the comparison between rainfall and love’s vagaries. Sammis’s cello is particularly effective on this cut proving a perfect foil for Mosser’s wild guitar solo.

The album’s title cut is worth investigating too. ‘Senses’ is a tight beater which, if we’re going back to comparisons, feels like Robin Thicke by way of Boz Scaggs, though neither (I think) ever employed an Ernie Isley style guitar in the way that Jody Mosser does here . Another great vocal from Barrett too and it’s his vocals that give the LP its unity. There’s lot going on with this album but “The Liberator” keeps it all together. If you want to find out more go to www.reverbnation.com/solfunk