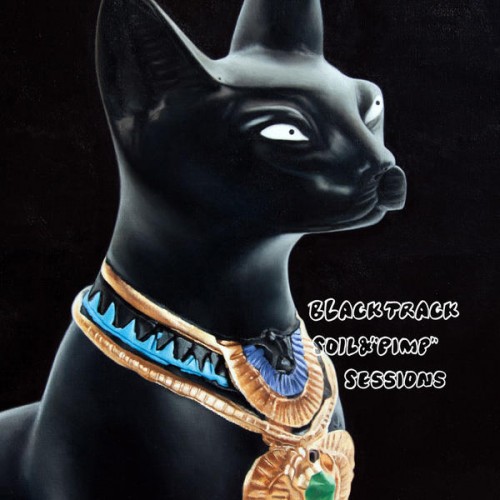 Soil and Pimp are a six piece Japanese jazz outfit, though they themselves prefer to label their sound “Death jazz”… defined they say as “a melange of careering and screaming jazz rhythms, club banging hip-hop beats, retro and neo soul grooves and rampaging punk rock and roll jams!”. They’ve been in business since 2006 and have been championed by tastemakers like Gilles Peterson. The band has played the Glastonbury, Monteeux and North Sea festivals and they’re hoping that with ‘Black Track’ (their tenth long player) they’ll gain more mainstream acceptance.

Having taken the 13 tracker for a few spins I’d suggest that achieving that goal is going to be hard work. Not that there’s anything wrong with the music here, it’s just that there’s little that’s easily accessible – the kind of stuff craved for by the mainstream; moreover there are so many flavours on offer that it’s hard to work out who would enjoy the entire work. For instance those who’ll love the neo soul sound of ‘In2 My Soul’ (great vocal from Xavier Boyer by the way) might struggle with the hard bop of the album’s title track. Jazz purists will love that one but they then may take exception to the rapping on ‘By You Side’ in the same way that years ago they railed against Guru’s ‘Jazzmatazz’ albums.

So maybe ‘Black Track’ is one for listeners to dip into – a bit like Forest Gump’s box of chocolates! Take and enjoy the track that appeals. Top of that list for most should be the slowed down cover of Herbie Hancock’s’ ‘Cantaloupe Island’…. accessible to all. ‘Papaya Pai Pai’ will appeal to those who like their jazz to be fun. This could be the soundtrack to a forties or fifties cartoon … think Popeye going toe to toe with Bluto! Different again is the slinky, smooth jazz unnamed introduction, but by now you should be getting the point. “Death Jazz”? … Who knows….? “A melange of careering and screaming jazz rhythms, club banging hip-hop beats, retro and neo soul grooves and rampaging punk rock and roll jams!”…. That’s probably more accurate!