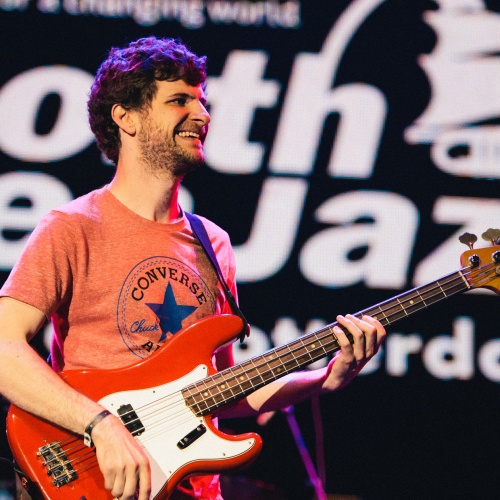 This year’s North Sea Jazz Festival  opened with a two-hour set from the incomparable Snarky Puppy. Despite being the recipients of two recent Grammy awards, it’s true to say that this versatile and protean American ‘neo-fusion’ aggregation have yet to establish themselves as a bona fide household name. But wider recognition, I think, is just around the corner, espically iof this gig was anything to go by. The Dutch compere introduced them as a “supergroup” and while a number of people in the audience might have initially dismissed that description as over-enthusiastic hyperbole to big-up a band that some punters might not have been familiar with, once the concert got under way it became clearly apparent that the master of ceremonies’ description was not very far from the truth.

They were indeed a “supergroup” – super-cool, super-hip and super-slick. But they had grit too. And substance as well as polish. Led by bassist and chief charter-member, Michael League (pictured left) – whose aesthetic vision has helped to shape the band’s distinctive sonic identity since their inception in 2004 –  the ensemble comprises three horns/woodwind, three guitarists, two drummers (one doubling on percussion) and a couple of ace keyboard players (Corey Henry on Hammond B3 and Moog, Bill Lawrance on piano and synths). As they proved on the night, each of these individuals is a master of their chosen instruments but what is astounding is how League has corralled their disparate talents so that they play and think as one. And though the band’s repertoire is not exclusively a jazz one – they incorporate elements from many different types of music, fusing jazz with R&B, with funk, rock and even classical and world music – Snarky Puppy have the attitude and finesse of a big band. They play with discipline and wild abandon in equal measure. Their ensemble work is hyper-efficient and super-tight while the solo passages offer an opportunity for creative freedom. And each time they seem to find the perfect balance between the needs of the band and the expressive desire of its individual members.

During the first half of the show, the group showcased material from their latest album, ‘Culcha Vulture’ – including the brooding, edgy ‘Tarova’ and the jaunty flute-led ‘Semente’ – and also turned back the clock to revisit some older songs. Cory Henry – who is due to appear later at the festival with his own band, The Funk Apostles – stood out with the inventieness of his sanctified Hammond organ contributions but also his beautifully lyrical Moog solos. For the second half of the show, Snarky were joined on stage by the full ranks of the Dutch Metropole Orkest under the baton of conductor/arranger, Jules Buckley, and then proceeded to give a full performance of their Grammy-winning album, ‘Sylva’ (apparently this was only the fifth time that it has been performed in its entirety). Framing Snarky’s polyglot grooves with sumptuous orchestral sonorities, the Metropole Orkest  brought a filmic dimension to the group’s music and helped to make it a truly memorable event.