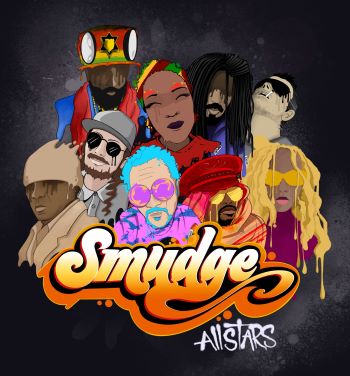 UK muso, Richie Stevens has spent his musical career championing free expression across all kinds of genres. The son of celebrated jazz drummer John Stevens, Richie’s impressive CV includes work with people like Joss Stone, Boy George, Damon Albarn and reggae star Horace Andy. His latest project – Smudge All Stars – is probably his most ambitious. His vision is of a free-flowing funk collective with the players inspiring and bouncing off each other to create a new funk universe and when he calls the collective “All Stars” he’s not kidding! Amongst the players on this, the crew’s eponymous debut LP, are artists like Pee Wee Ellis, Camelle Hinds, Fred Wesley, Omar and a certain George Clinton! And if we were to try and give you the overall flavour of the ten tracker we’d have  to point to that man Clinton… the spirit of Parliament, Funkadelic and the whole Mothership thing looms large here… but for a little variety expect a different vibe or two here and there.

Yes, expect the unexpected, like ‘Our Lives’, which was the band’s debut single earlier this year. With a classical Handel-esque harpsichord intro, the tune develops into a dub heavy, reggae romp with input from legends Lee ‘Scratch’ Perry and Dennis Bovell (both “stars”, of course!). Then there’s ‘Starkiller’ – a spaced out, spacey, electro meander. At just over one minute it sort of explains the genesis of Smudge – but not quite! Different again is ‘Still Here’ which features complicated jazz sax lines from British alto saxophonist James Gardiner-Bateman riding over an atmospheric track and some rhyming from MWS.

But – and it’s a big BUT – the Smudge signature sound is unrelenting funk best typified by the album opener, ‘Brutal Funk’. This was the band’s second single and was crafted by Stevens and Jamiroquai member DJ D-Zire with vocals from British soul singer Mary Pearce and never has a tune been more appropriately titled; it is brutal; it is FUNKY and it sets the tone perfectly for what’s to come – like the Clinton-led ‘Up Is Just A Place’, the Charlotte Kelly vocalised ‘Freaky Toe’ or the bizarre ‘B Side’ which features Mary Pearce, Derek ‘Dr Mouthquake’ Greenand and Fred Wesley’s delicious trombone. ‘2 Cold To Hold’ is another intrigue-packed track. This marries funk with blues and a touch of gospel. Listen up to Mitt Gammon’s haunting harmonica.

However, to single out tracks like that one as “intrigue packed” does a disservice to everything else. Each carefully crafted track offers intrigue and interest and whichever “All Star” is featured they deliver … big style. When describing his creation Stevens said: “Whilst chatting with Dr Funkenstein himself, it seemed relevant to ask, ‘what is the funk?’ seeing as I would finally get a reliable answer. The Dr said ‘when you’ve given all you’ve got, and you reach really deep to find the very last drop……. that’s the funk!’ Now we know … and the proof is in the hearing!