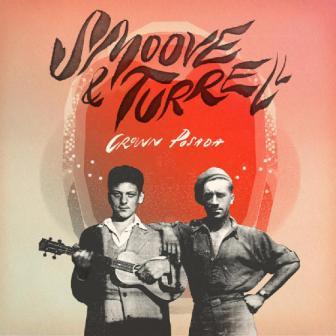 Smoove and Turrell are a Brit soul duo hailing from Newcastle. ‘Crown Posada’ is their fourth album and by now you should be familiar with the lead single… S&T’s energized take on the old Hot Chocolate song, ‘You Could’ve Been A Lady’. The cut’s been all over the radio for the past few weeks with BBC Radio 2 jocks being particularly partial to it. Easy to hear why… it’s big and brash and though it is vaguely familiar the two Geordies give it their own special treatment. It’s a proper party tune and no wonder that it opens the set. It sets out the stall in fine form and there’s plenty more of the same throughout the album

Second cut ‘No Point In Trying’ is another pacey stomper with just a whiff of Chic style guitar in the mix; that’s followed by another frantic item, ‘Given It All Up’ while ‘Now That Love Has Gone’ maintains the momentum, though this time, there’s a garnish of hip-hop. The riff-laden ‘Fight On’ is another with floor appeal, though the lyrics here (and indeed throughout the album) transcend the usual “get out on the floor” type of thing. This one tells the tale of an old North East wrestling champion who finds it hard to fit into the modern world. ‘New Jerusalem’ also deals with the conflict of the old and the new but the bassy, funky cut is a million miles away from the traditional hymn.

Want more proper story songs? OK try ‘Glue Bag Flags’ on which the boys dip into their childhood memories as they retell the tale of finding sniffers’ glue bags in the woods where they played; then using the bags as toy flags on the little castles they built. You’ve got it … don’t expect the expected from Smoove and Turrell. Take the album’s title track for instance. The Crown Posada is actually an historic Newcastle boozer and S&T’s jazz funk tune of that name is their homage to the pub and the times they’ve had there.

The LP’s big ballad is ‘Glass’ – a reflection on the fragile nature of relationships. John Turrell proffers a big, soulful vocal over a simple piano (Andy Champion) and cello accompaniment. Like all the music herein, it’s real, modern soul music but maybe not soul as you’ve known it.