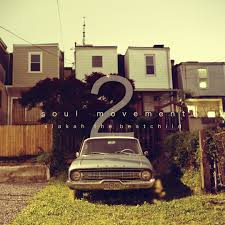 Toronto-based multi-instrumentalist, producer and arranger, Slakah The Beatchild (Byram Joseph) made his debut solo recording in 2010 with ”Soul Movement’. Truly progressive, it was welcomed by the Stateside underground soul and hip-hop scenes and this sequel kicks off where volume 1 ended with an infectious semi-instrumental, ‘Cut A Rug (Byram’s Groove)’. It’s an odd tune – like nothing you’ve heard before but you can muse on and acknowledge its roots. Beware, though, it is oddly hypnotic; no wonder the progressive jazz DJs (radio and live) have been programming it. More of the same on ‘Adventure For 2’, the lengthy ‘Keep Up’ (would love to know where the strings have been sampled from) and the jazz flavoured ‘Endurance’.

Slakah hasn’t forgotten his hip hop roots either. Fans of Guru style rhyming will love ‘Stompthatflo’ which features Spek Won. He’s also upfront along with Ian Kamau on ‘Miscommunication’. More conventional soul is represented by the almost 60s vibe of ‘Love Fool’, featuring a great vocal from upcoming soulstress Tanika Charles. Progressive Northern soul DJs (if such a creature exists) could do worse than investigate this.

The LP’s other easily accessible tune is ‘Number 1’ featuring Glen Lewis. It’s coming out of the neo/nu soul stable but has an off the wall feel about it that’s not quite of that genre… indeed that’s a good way to look at the album and Slakah’s music as a whole. Yes, hear bits of all kinds – notbaly D’Angelo, J Dilla, Guru and Raphael Saadiq but hear it in a totally new way. The philosophy is actually summed up in the album’s very best tune– ‘Where’s Yesterday’, a lovely lament on the dearth of properly “new” soul and R&B songs. Slakah complains that “all (the Radio DJs) that they play is always the same”. Yes, “Stevie had inner vision and Minnie Riperton kept you listenin'”, Slakah retorts… but now everything is the same. It’s clear he’s doing his best to rectify things; so, if you’re up for something a tad different, something adventurous, try the Beatchild… you never know.